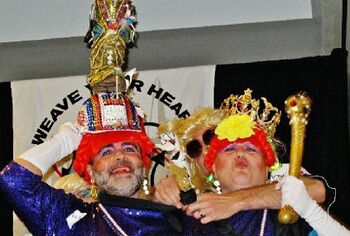 The Barf Sisters were the winners of the 2013 Honky Tonk Queen Contest.

My sister and I went to the 2013 IAGSDC Weave Your Heart in San Francisco Square Dance Convention as mere mortals, but we returned to New York as royalty. Honky Tonk Queens that is. We really never imagined that as conjoined twins, we could win the crowns. We knew we were beautiful, thin, stylish, and talented, but we couldn't conceive (literally) we would receive a standing ovation from the full house audience.

An act like ours doesn't do it alone, though. How could we? We're attached! We want to thank our costumer, and dresser Gabriel Rivas who placed us in purple sequins. Perhaps it was a foreshadowing of our coming royalty? We have to thank the little people. Michael Coan took good care of us backstage (we're just sayin'), and calmed our nerves (if that's what you want to call it). And of course, we have to mention Judy, Liza, and Ethel, whose voices we used to bring down the house.

It has been quite a while since the crown has rested in New York. With the crown comes many responsibilities. It's now time to repeat our accomplishment. Start rehearsing, girls! We need to show the square dance community just how much talent the queens from New York have. It would be wonderful for some new talented blood to compete in the next Honky Tonk contest. Let's showcase all the wonderful talent we have in our New York club, Times Squares.

On a personal note, we found the experience both exhilarating and liberating. We are checking this one off of our bucket list.

If we have one piece of advice for future contestants: Keep your songs short and fabulous (like Michael Coan in drag!)

|The Barf Sisters at the 2016 Honky Tonk Queen Contest

Retrieved from "https://iagsdchistory.mywikis.wiki/w/index.php?title=Barf_Sisters&oldid=24989"
Categories:
Cookies help us deliver our services. By using our services, you agree to our use of cookies.