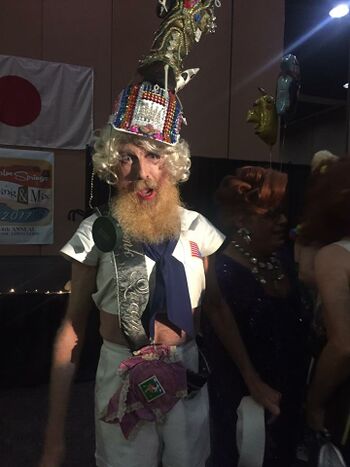 A somewhat dazed Diamond Lane, moments after accepting her crown and sash at the 2017 HTQ contest.

Third time's a charm! 2017 HTQ winner Diamond Lane charmed the Palm Springs convention audience and judges with her rendition of Ruth Wallis' The Dinghy Song. (Lyrics and link to song can be found below.)

In 2016, Diamond Lane had unsuccessfully attempted to win the HTQ crown a second time, with a racy roadside rest stop number (see video at bottom right).

A performer of indeterminate gender, dubious talent, and questionable morals, Miss Lane is delighted to have been chosen as 2017's Honky Tonk Queen in Palm Springs. A girl's best friend and a boy's worst nightmare, she adds sparkle to her ditties (with a "d") mined from the deepest depths of the American Songbook, with or without her backup entourage, the "Rest Stop Romeos".

As a High Occupancy Lane (two or more passengers, please) she was thrilled to be the Express Lane to Your Heart at the Seattle Convention in 2018, where she delivered a devastingly brilliant song to the tune of "Penny Lane".

Diamond Lane's social secretary is rumored to be Ed Wilson of the El Camino Reelers.

Sung to the tune of Penny Lane by the Beatles:

When Diamond Lane became the reigning Queen of Honky Tonk
She knew that she would have to put on this year's show
And all the Old Queens that come and go, say "I told you so!"

But with a tendency to dither and procrastinate
She puts it off for months on end til time is near
And Freeda Evryone and Kelly Shortandqueer
Make it very clear: “Get your ass in gear!”

To Seattle where they’re sweatin’ at the Sheraton
They’re hoisting speakers up and laying down the floor
And all the Old Queens rally round once more
And it’s tits galore! Who could ask for more?

Diamond Lane is in a suitcase in my trunk
With the crown and sash and other junk she packed and meanwhile back...

Up in the lobby the conventioneers are mingling
They’re sipping cocktails while they're waiting for the show
And they do their little do-si-do while they say, "Hello!"

And Diamond Lane is in a panic in her hotel room
She left her wig down in the car in the garage
And this makeup will not camouflage!
Where's my entourage? It's sabotage!

Sailing, sailing, over the ocean blue,
Davey's got a dinghy, so he paddles his own canoe.

Now, other sailors take their girls canoein'.
It's an old, old, navy technique,
But Davey gets more girlies with his dinghy,
And what is more, it never springs a leak.
Every time it rains, his little dingy gets wet,
But Davey says it's waterproof, so he doesn't fret.
The cutest little dinghy in the navy. Heave ho! Heave ho!

It isn't very narrow and it isn't very wide,
But you should see that thing go in and out with the tide.
The cutest little dinghy in the navy. Heave ho! Heave ho!

To keep it from the girls, Davey says, is very hard.
Why, it isn't even safe down at the Navy Yard,
The cutest little dinghy in the navy. Heave ho! Heave ho!

The Admiral has a flagship and the captain's got a cruiser;
But Davey's got a dinghy. It's a lollapalooza!
The cutest little dinghy in the navy, and the old Admiral is heard to say:
If he had Davey's dinghy he would always feel springy.
He'd ride the WAVES night and day.

Diamond Lane in her winning performance from the 2017 Honky Tonk Queen Contest
Diamond Lane and the Rest Stop Romeos at the 2016 Honky Tonk Queen Contest
Retrieved from "https://iagsdchistory.mywikis.wiki/w/index.php?title=Diamond_Lane&oldid=16084"
Categories:
Cookies help us deliver our services. By using our services, you agree to our use of cookies.