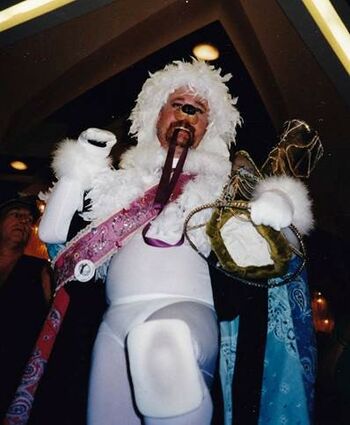 Elvis was the winner of the Honky Tonk Queen contest in 1996.
For more information, contact Ron Thomas

1996 San Francisco
Back on the Bay

This Honky Tonk Queen Contest won by a dog! Not the kind that wins every year, but an actual dog – who started out the year before as an also-ran, escorting Miss Grace Land, and somehow rose not only to Honky Tonk Queen, but also Best in Show. Elvis – woof – would reign supreme for the next year.

Retrieved from "https://iagsdchistory.mywikis.wiki/w/index.php?title=Elvis&oldid=16425"
Categories:
Cookies help us deliver our services. By using our services, you agree to our use of cookies.