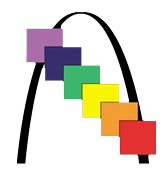 Trevor Slom founded the Gateway Squares in 2003. He had completed MS/P lessons with the Chi-Town Squares before moving back to St. Louis in 2001. Trevor consulted with Jim Maxwell of Chi-Town on how to start a new club. Almost all his advice was helpful. He said it would largely depend on getting a caller. The first caller Trevor contacted sent him to Stan Mangona, who accepted the invitation on the spot despite, by his own admission, knowing nothing about gay people. He ended up being a delight and was instrumental to the club's early success.

Among the first group were three who had danced before. Trevor's friend, Mike Schwartz (later a club President), brought along his brand new boyfriend, Aaron Wells (later a club President), who later became the club caller. As luck would have it, a Wilde Bunch dancer, Phil Zinzer, was new to St. Louis and responded to the notice in the local gay newspaper. And finally, a dancer from the Edo 8’s, Yoshihiro Katazawa, was visiting St. Louis for a year. With Stan, they helped everyone else enter this strange fun world. Classes were held at the University City Community Center.

In March 2004, Trevor invited some Chi-Town members to St. Louis to teach styling. Peter Holden taught the class and he came with carloads of Chi-Town support. Their enthusiasm took the nascent club's energy to a new level.

The first class graduated 16 people in May 2004 at the plus level. The graduates included several who danced with the club for several years: Pat Yates, Cheryl Stockton, Tommy Maloney, Doug Soderburgh, Mike, Aaron, Curtis McMillen (Trevor's partner) and Doug Thornburgh.

After classes finished, Stan encouraged the class to immediately start dancing with the straight clubs. It was the only game in town. And, like in so many places before us, we had to take a deep breath and head into what seemed like the straightest places on earth and the the local male dancers had to get used to swinging men as well as women. It worked out as well as could be expected and for several years, straight clubs strongly supported the development of the Gateways.

Just two of the initial 16, Trevor and Curtis, headed to convention in Phoenix in July of that year for their first IAGSDC conventions But they returned with stories that would inspire later attendees.

The club successfully recruited large, enthusiastic MS/P classes for the first four years. Retention, however, was a problem.

Dancers from the third class, graduating in 2006, who continued dancing with the club were Brian Vetruba, Michael Getty, Mark Malott and Jeannie Young.

Before the fourth class, Michael Getty wrote a piece about gay square dancing in the local gay paper. A week later, over sixty dancers showed up for the first lesson. Even with attrition, an astonishing 36 completed plus-level lessons in Spring 2007. The club had a difficult time, however, keeping these dancers dancing following graduation. Kathy Halpin, Tom Robertson, Wiley Martin, Brad Hayes and Margaret Hill were among them.

Starting with 2008, the Fall MS/P classes began getting smaller.

In 2008, several dancers were ready for A1/A2 lessons, but Stan did not teach at that level. Two local callers, Kevin Bersing and Dennis Mineau, had taught A before, but not in several years. They decided to share the teaching duties and a new adventure was born.

When this first A2 class graduated, the local A/C dance club, the Zig Zags, invited the graduates to come dance with them at their local Tuesday workshop. But this was not without controversy. Their club caller announced the gays were not welcome. His club, who had long included a gay man, responded by firing their caller, the only one in the region who called at the higher levels. They became a tape club. Gateway members continue to dance with them.

In 2010, Aaron Wells began teaching the MS/P class. As his calling advanced, he later took over duties with the A class.

The initial club caller was Stan Mangona. Later, as his skills developed as a caller, Aaron Wells took over the calling duties. Kevin Bersing and Dennis Mineau have also taught Gateway Squares classes.

Levels: Mainstream through A2.

Retrieved from "https://iagsdchistory.mywikis.wiki/w/index.php?title=Gateway_Squares&oldid=23664"
Category:
Cookies help us deliver our services. By using our services, you agree to our use of cookies.