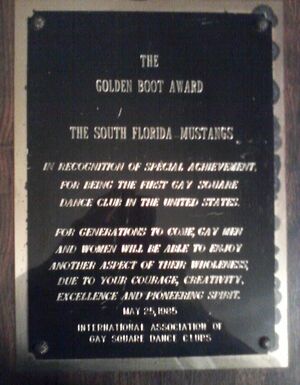 (still hoping for the text of Art Smith's presentation)

In 2010, Chris Phillips discovered an artifact:

I was going through storage in my garage at the duplex I own in Hollywood (FL) and found the "Golden Boot Award Plaque" packed away with the infamous mirrored boots from the Round Up/Crossfire.

It was the plaque that Art gave to the Mustangs the first time the Golden Boot Award was passed on. The plaque reads:

In recognition of special achievement
for being the first gay square
dance club in the United States.

For generations to come, gay men
and women will be able to enjoy
another aspect of their wholeness,
due to your courage, creativity,
excellence and pioneering spirit.

Retrieved from "https://iagsdchistory.mywikis.wiki/w/index.php?title=Golden_Boot_1985&oldid=2751"
Category:
Cookies help us deliver our services. By using our services, you agree to our use of cookies.