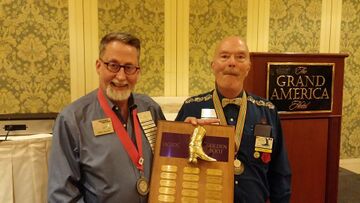 presentation at Squeeze the Hive by JW Paulson

But seriously, I don’t remember a whole lot of what happened after Sandie knocked me for a loop by honoring me last year with the Golden Boot. Sis, I love ya, and I’m pretty sure I didn’t really thank you properly at the time, so, thank you. I do remember crying … a lot…. and drinking …. a lot; that’s about it. Did I dance? Who knows? I do know that I was astounded and awed to receive an award first created by my home club over 30 years ago. As Woody (Mary Jane Wood) noted two years ago, even though the award is meant to acknowledge a recipient’s contributions to gay square dancing, we, or at least I, can hardly pay back the gifts that this group has given me. Square dancing connected me to my partner of 18 years, Tom Long. When he was diagnosed with cancer our square dance family rallied around us. After Tom lost his battle, it was square dancers and square dancing that kept me from crawling into a bourbon bottle and pulling the cork in after me. Organizing a few dances kind of pales in comparison.

On a brighter note: before I get to my choice as this year’s recipient, I’d like to drag out the suspense a little bit longer and ask you to indulge this “bitchy old queen” who has, wisely or not, been given a microphone and a soapbox, and allow me to pontificate briefly on a couple of thoughts near and dear to my heart.

First of all, to all the newbies, the convention virgins, our first-timers: It is wonderful to have you with us. Welcome to our big, boisterous, often dysfunctional and always incredibly loving family. No pressure, but you are the future of this event. You are why all these other old queens, and the occasional straight person, work their butts off for years putting this party together.

This is my 29th convention; my first was the FIRST convention in 1984 (I was but a child) and I still have memories from that weekend that are as clear as if it happened last week. I hope that thirty years from now, you will be able to say the same. Subsequent conventions will be larger, smaller, highly organized or totally chaotic, but there’s nothing like your first convention. Have fun, and remember: you can sleep on the plane.

I would also like to say something to all the Mainstream dancers here tonight. The Plus dancers, too, but mainly the Mainstream folks and the people who keep our entry programs going year after year. What I would like to say is: “Thank you”. Thank you for being willing each and every year to recruit and train and encourage the new dancers who keep our activity alive. Thank you for allowing level snobs like me (that’s supposed to be a joke, btw) to explore the upper programs within this, our chosen past-time. You are the heart of this beast. Without your dedication, this activity would be like a tree with no roots; a big, glorious, sparkling, fabulous tree, but rootless, nonetheless.

So, promise me one thing, Mainstream folk, no … promise yourselves one thing. Never let anyone tell you that you are “just” or “only” a Mainstream dancer. So what if you don’t know a Galaxy circulate from a Hang Loose? The important thing is that you dance. And that makes you family. Period.

Now to the real reason why I’m up here in the first place: The Golden Boot. To enlighten those unfamiliar with this award, the Golden Boot Award was created in 1983 by Puddletown Squares to recognize Art Smith who founded not only Puddletown but the clubs in Portland and Vancouver as well. After the first convention proved to be a success, Art felt it would be a good way to recognize people who, or organizations which, have made on-going contributions to the continuation and success of the Association. This is, however, not an Association award; it is presented by one year’s recipient to his or her choice to be the next honoree. The choice is strictly personal; no polls or voting is involved. Previous recipients include callers and dancers, men and women, straight and gay.

Whenever we Square Dancers get together, we talk a lot about family and commitment, and never more so than during Convention. These two concepts became the guiding principles for making my choice for this year. My choice to receive the Boot has demonstrated a years-long commitment to this activity, at both the club and national level. Whether it involves Conventions, Fly-ins, selling raffle tickets, or even sewing: “Been there, done that.”

But even more, for so many of us,this recipient is there as a friend, a mentor, a host, a critic, a guide, and even refuge from a blizzard. (And no, I don’t mean Lois.)

I am so excited to be get to say this.

My choice as this year’s recipient of the Golden Boot is my very own birthday twin, “Madame Chairman” …

Retrieved from "https://iagsdchistory.mywikis.wiki/w/index.php?title=Golden_Boot_2014&oldid=4631"
Category:
Cookies help us deliver our services. By using our services, you agree to our use of cookies.