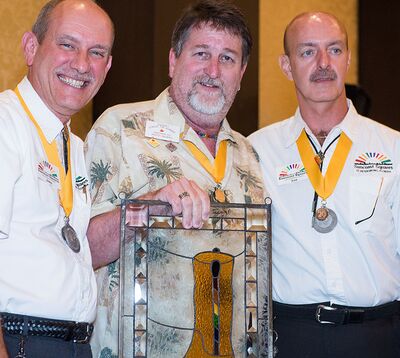 We would like to thank Phil Davis for bestowing this award on us last year. We are truly honored and humbled by it. As most of you know, we were not able to be at convention last year because we were taking care of Leo’s parents and it wasn’t decided until just about 2 weeks before convention that we would not be attending. It was the first time we had missed a convention since our first, in Seattle in 1993.

Some of you already know the story of which we are going to tell here. Leo and I were bitten by the square dance bug in Baltimore in early October 1992. When we returned home to Chicago, we began inquiring about lessons with the Chi-Town Squares. Chi-Town had begun their lessons just after Labor Day and they were too far along in their lessons for us to be able to catch up and to dance with them. We did not want to wait a full year to begin lessons, so we called the Cream City Squares in Milwaukee, WI. (we lived almost halfway between Chicago and Milwaukee at the time) We spoke with Joe Frazier, who was teaching the lessons. Joe told us to come on up, they had just started their lessons a few weeks before. He said they were a small club, one square, and they would push and pull us through until we got caught up with them, and we did just that.

About 6 weeks into our square dance lessons, we suffered a devastating house fire at our home. We received a phone call, while we were at work from the Lake Bluff Volunteer Fire Dept who told us to come home, your house is on fire. We had just moved into that house 3 months prior, and some things were still in boxes. Long story short, we lost 1/3 of the structure of our home, almost all of our possessions and most importantly, our beloved pets. We had 2 dogs and 2 cats who were between 9 and 13 years old and we had them all since they were pups and kittens. That was our loss.

The day after the fire was our regular lesson night and we were wondering if we should attend? We had, literally, only the clothes on our backs. We felt if we didn’t go, we would just sit in the hotel room and cry. We did end up going to our lesson that night and the Cream City Squares just wrapped their arms around us, they supported us. Because we were living in a hotel, for the next 5 months until our Mainstream graduation, two of the members had us up to their home every Wednesday night for dinner before lessons. For us, we say it was square dancing that got us through that first year after the fire. As we all know, it is difficult to be thinking of anything else while you are dancing. It was a time I looked forward to the most each week; it was my emotional getaway at the time, with all that was going on in our lives. We attended our first convention in Seattle in July 1993 while we were still living in the hotel.

Now fast forward to last year, 2015. We were taking care of Leo’s parents, not so different from what so many of you have done for your own parents and in-laws. Leo’s Mom was in the hospital for 4 weeks where she almost died, followed by 4 weeks of rehab. Up until that time, she was the primary care giver for Leo’s 92 year-old, wheelchair bound, father. She was still in rehab at the time of convention and we were in the process of packing them up and getting ready to move them to an assisted living community near our home. We were doing nothing heroic, nor anything more than what so many other people have done with their loved ones. Leo’s parents did celebrate their 68th wedding anniversary last September and his Dad passed away in October.

On top of all the other things going on for us, on the 1st day of convention last year we had to put down our beloved 9 year-old Golden Retriever, Chelsea. She had an inoperable tumor which had been diagnosed just 5 days before. We were pretty bummed out, to say the least. Then, just 2 days later on Sunday afternoon, Phil Davis called to tell us he was going to be awarding us the Golden Boot Award in just a few hours. Now, for the 2nd time when we were at a low point in our lives, we were being supported and uplifted by our square dance family.

Our reactions were not unlike any of the others whom we have all witnessed to receive this award. We were numb, dumb founded and in shock. We never thought in a million years that it would be presented to us? We didn’t feel we had done anything special? We are just John & Leo. Leo and I have always just tried to help out wherever we could and to try and give back to square dancing, a little bit, of what square dancing has given to us. We feel we can all make a difference in square dancing; be it in the form of a smile, a handshake, a hug or words of support and encouragement to a fellow dancer.

As many of you know, each year at the annual IAGSDC convention, a member of our community who has made meaningful contributions to our activity is honored with the Golden Boot award. This award is not from the IAGSDC, but is instead, a personal award, made to the recipient by the previous recipient. As such, there are no rules or guidelines for how the recipient should be selected. In the past, the award has been given to individuals, groups, and organizations.

A little history here...The first Golden Boot Award was given to Art Smith in 1983 by the Puddletown Squares in Seattle WA. Art was the founder of the Seattle, Portland and Vancouver clubs. In 1985 Art awarded the Golden Boot award to the first LGBT square dance club, the Miami Mustangs and their caller, Chris Philips. Will all the previous recipients of the Golden Boot Award who are with us tonight, please stand up. As we look around, Leo and I are in awe, to be considered to be in your company.

Retrieved from "https://iagsdchistory.mywikis.wiki/w/index.php?title=Golden_Boot_2016&oldid=4909"
Category:
Cookies help us deliver our services. By using our services, you agree to our use of cookies.