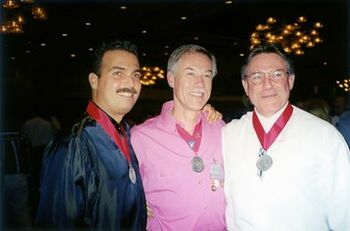 The story of the origins of how the medallions are made

as written by Freeman Stamper [1]

At the 1998 Portland Convention. I relinquished the Medallion Dancer Project to Rick Hawes. At the 1989 New York Convention, I had started the first gathering of information about earlier convention registrants. I was visiting with my friend David Bowers for a few days prior to the start of Convention, and I said to him one morning: “Just because you manufacture plumbing supplies, do the products always have to look like plumbing parts?” Thus began his efforts to cast the medallions after Mark Davis had completed his design concept. There were many failed attempts with his fabricators in China because David was never satisfied that the end product had the detailed finish that he thought was appropriate. In 1989, David was in the beginning of a relationship with Walter Lopez which eventually became a marriage. My friendship with David goes way back to the early 1970’s in Washington, DC, when he and friends started going to the big drag show I did for six years called “Show Stoppers.”

As the 1993 Seattle Convention drew nigh for the first presentation of the medallions at the first 10th convention, David and Walter turned to fabricators in the U.S. He was able to locate a gentleman who was basically retired but agreed to produce them. The medallions arrived in San Francisco only days before I was to leave for Seattle and were actually engraved in Seattle. What a madhouse that was.

My last official act as Mother of the Medallion Project was to present medallions to David and Walter. It was the first time they had been to a convention and the first time they allowed me to tell anyone that they had funded all the research, production attempts, and the final production costs. They were awarded as Angels of Square Dancing. That’s a great story of selfless giving because a friend was trying to do something in an activity in which they had no interest.

After a long battle with cancer, David L Bowers died on the evening of, September 13, 2019. Please keep Walter in your closest and dearest thoughts. For me, it’s one of those moments when my grief cup had been filling, reached the tipping point, and is now overflowing. I am moved to tears and deep sadness.

Retrieved from "https://iagsdchistory.mywikis.wiki/w/index.php?title=Making_the_medallions&oldid=22795"
Category:
Cookies help us deliver our services. By using our services, you agree to our use of cookies.