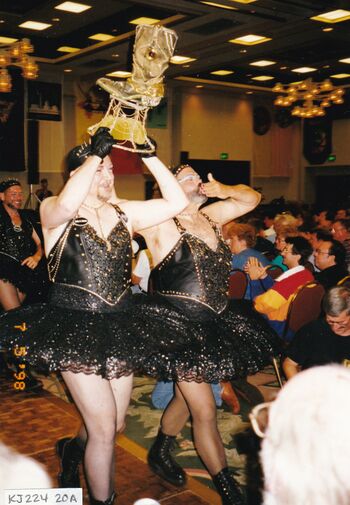 (L-R): Belle E. Button & Belle Whatling parading with the crown when they won the Honky Tonk Queen contest at Weave The Rose, 1998

The Christmas Belles were the winners of the 1998 Honky Tonk Queen Contest.

"1998 Portland
Won't Udo That Voodoo That Udo So Well!

OK -- size does matter, as we found out this year when the Belles of San Francisco made their triumphant entrance in the contest -- marking the first time the contest was won by a float -- or four floats, if you weigh it out!!! In no particular order, they were: Belle Whatling, Belle Poitrine, Belle Epoque and Belle E. Button. Great costumes, minimal talent. They did prove what Lois and Tami have always believed: that drag and leather are at opposite ends of the same continuum -- and these twisted bitches lived at both ends simultaneously! In addition to that, they all fed off of one brain!"[1]

Retrieved from "https://iagsdchistory.mywikis.wiki/w/index.php?title=The_Christmas_Belles&oldid=25062"
Categories:
Cookies help us deliver our services. By using our services, you agree to our use of cookies.