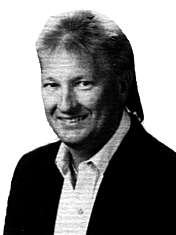 Vern Weese, Las Vegas, NV began calling in 1972 while in the U.S. Navy at Panama Canal Zone. From there, he moved to Honolulu where he was club caller for the Diamond Heads'N'Sides and the B&B's. In 1979, he moved to Dallas, TX where he became club caller for the Swinging Singles, Acey Duceys, Old Tyme Squares, Cowtown Cloggers, Gainesville 49'ers, Gadabouts, VW Bugs, and McGregor GrandSquares of Waco, TX.

From 1980-84, Vern served on the Texas States Callers Association. In 1982 he moved to Houston and called for the Aces, the Square Deals, Jesters, Humble Wildcatters, Garden Villas, and the BW Bugs.

Vern has been on the Staff of Mountain Recordings for seven years and has been a full time traveling caller since 1984. He presently calls for VW Bugs and holds beginner classes and is resident caller at the Boulder Lakes RV Resort.[1]

Long time caller, Vern Weese passed away Monday, January 3, 2005 after being taken off life support which he was put on since December 8th. He was waiting for a lung transplant. He had a long battle with lung problems called black lung disease plus numerous other heart problems. His funeral was January 7th in San Antonio, Texas. He taught classes in the Austin, Texas area. The Merry Mixers took up a collection to help his wife, Nancy with expenses. For anyone else wishing to help Nancy or send a card, her address is 49 Woodcreek Drive, Wimberly, Texas 78676.[2]

Retrieved from "https://iagsdchistory.mywikis.wiki/w/index.php?title=Vern_Weese&oldid=21510"
Categories:
Cookies help us deliver our services. By using our services, you agree to our use of cookies.