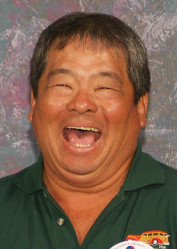 Byron started square dancing in 1988 with the Sunnyvale Singles and Square Circles in Dublin. He started dancing Advanced in 1989 with the Ranchero Squares, also of Dublin. The caller for that club, Terry Moiser, saw some potential and started mentoring Byron to be a caller. After Terry passed away, Byron continued his training by attending several caller schools to hone his craft.

Eventually, Byron became the club caller for the Swinging 21ers, the Cactus Corners youth group, and the Guys and Dolls Exhibition Team. He dances Mainstream through A2.

After taking a short break from calling, Byron is back and ready to rock the calling world. He has called at the California State Square Dance Convention, several National Square Dance Conventions, and locally at the Golden State Round-Up. He has also served as the program chairman for numerous square dance festivals and conventions. His spouse is Alanna.

Retrieved from "https://iagsdchistory.mywikis.wiki/w/index.php?title=Byron_Yoshimura&oldid=21287"
Categories:
Cookies help us deliver our services. By using our services, you agree to our use of cookies.