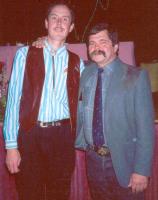 presentation at Cast A Shadow In The Sun by Karl Jaeckel

Isn’t it great to be here in Miami!

I was last here in February, 1983 for the South Florida Mustangs inaugural fly-in. As you know, or should know, that fly-in is credited as being the starting point for this association. It was on the back porch of Chris Phillips’ new bar, the Crossfire, that representatives of four clubs laid the foundation for the National Association of Gay Square Dance Clubs. Since we are again in Miami, I would like to review briefly the circumstances of gay square dancing at that time.

You must understand that during 1981 and 1982 there were few opportunities for we gay square dancers to get together; there were no fly-ins and there was no convention. Instead, our focus was on the dance festivals held in conjunction with rodeos, especially the National Gay Rodeo in Reno. From rodeo event to rodeo event interest in square dancing grew. Our dancer network gained strength and as a group we developed a sense of independence. When the Mustangs offered to host a fly-in in Miami, we all took interest and made plans to attend. For the first time a major square dance event had been planned for the enjoyment of gay and lesbian square dancers everywhere.

Although the turnout for the fly-in was small by today’s standards, I remember being truly impressed that dinner reservations for our entire group was for 38! We were strong in our conviction that combinations of allemande left, and left and right grand, paired with dancer camaraderie would have broad appeal to the gay and lesbian community. We knew that our group of 38 would grow; we knew that we should take steps to formalize this association. Now, more than 8 years later, it is good to return to Miami for Cast A Shadow In The Sun.

As I have looked about the Association to identify a recipient for this year’s Golden Boot Award, I have observed several outstanding qualities among the candidates. I would like to share those qualities with you; we all would do well to be aware of them. They are:

Most of us are conscious of the well-being of our local clubs and are putting this list of qualities to good use at home. I would encourage more dancers to develop the same consciousness of the well-being of the IAGSDC. Just as each local club is making a worthwhile contribution at home, so too the Association is making a worthwhile contribution on a broader scale. Find a piece of the Association you can adopt – select a project and get involved!

Last year in Vancouver I was quite honored to be Freeman Stamper’s choice for the 1990 Golden Boot Award. I have been glad that his decision was to honor me not with a plaque, but with a commemorative watch. The watch has been with me everywhere, and it remains a constant reminder of my interest and pride in the Association.

Again this year I have chosen to honor the recipient of the Golden Boot Award with a watch. I have changed the design slightly, this time using a dark face rather than a white face, and replacing the stylized boot with a boot sketch from a Tony Lama catalog. Again the back is engraved. In big letters it reads, “1991 Golden Boot Award HARLAN KERR”.

Retrieved from "https://iagsdchistory.mywikis.wiki/w/index.php?title=Golden_Boot_1991&oldid=2817"
Category:
Cookies help us deliver our services. By using our services, you agree to our use of cookies.