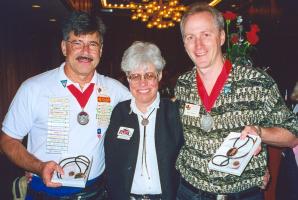 presentation at Weave The Rose by Kris Jensen

For those of you who are new to convention this year (and I hope there are a lot of you), you may be wondering what this is all about.

The Golden Boot is an idiosyncratic award, originally created by Puddletown Squares to honor one of its members, and evolving into an international honor, awarded by the previous year's recipient. The list of Golden Booters is a who's who of gay and lesbian square dancing.

Last year, Carol Roberts of Vancouver passed the Boot on to me and so I joined a select group, united by their love of and commitment and contributions to gay and lesbian square dancing -- and also joined by having gone through the trial of selecting the next recipient.

And trial it is -- gay and lesbian square dancing inspires tremendous commitment and contributions among those of us who feel its siren song, and so there are many wonderful and dedicated people who deserve recognition.

But the Golden Boot is a personal award (no committees involved) and the choice must finally be made. What I value most about square dancing is the community. I believe square dancing is a community building activity. You can't dance in a square without feeling a sense of community with that square, if only for length of the tip. And you can't dance at a fly-in or a convention without feeling a certain sense of community with all the dancers there.

And so tonight, I'd like to honor a couple. Individually, these two have contributed in their own ways to our square dance community. Together, their contributions span the local and global range that adds up to Gold Boot.

They met at a fly-in, they developed their relationship at fly-ins and conventions; after moving in together, they have continued to dance -- and to help build our community. One saw a need for something that would bring us together on a global level -- and he created it. One knows that without community developed in our local clubs, there would be no global community -- and so he works tirelessly for his club.

SquareUp has become a valuable resource for our IAGSDC community, bringing us together between conventions, allowing us to get to know each other, and showing us at our best to non-square dancing gays, and non-gay square dancers.

Here's a secret -- around the time Mike began to develop SquareUp, I was also thinking about a publication for our whole community. But while I was contemplating a little Xeroxed newsletter, Mike had a grander vision -- and Mike has made his vision reality.

Mike conceived and developed SquareUp, and, with a lot of help from his friends around the country, has been publishing it regularly since 1994. You can read SquareUp and feel a part of our community -- and you can contribute to SquareUp and help build our community.

While Mike has devoted much of his energy to the global gay square dance scene, his life-partner, Ric Gonzalez, has focused on his local club. Everyone who has had contact with the Wilde Bunch, including all of you who have come to our fly-ins and the 1992 convention, know that Ric is a Wilde Bunch mainstay. Ric has held every position in the Wilde Bunch except caller (and even there, he's done some teaching); he's been involved in every new class (except when he moved to San Francisco to be with Mike); he's always available to help with whatever needs doing. A square dance club depends on developing a sense of community among its members; Ric is master at building that community on a local level, both within the Wilde Bunch and between the Bunch and other Albuquerque square dance clubs.

Ric and Mike have been involved in gay square dancing for a long time -- Ric received his 10 year medallion several years ago; Mike received his a few minutes ago. I know both Mike and Ric will continue to lead us in building the community that is gay and lesbian square dancing.

To commemorate this occasion, I have two bolos. Because Ric and Mike are a couple, the bolos are matching. Because they're individuals and have contributed to gay and lesbian square dancing in their individual ways, the bolos are not identical. And, because I'm no fool, I'm going to let them decide who gets which!

Freeman Stamper, the 1989 Golden Boot recipient, has also provided the special Golden Boot dangles that go to all boot honorees.

Retrieved from "https://iagsdchistory.mywikis.wiki/w/index.php?title=Golden_Boot_1998&oldid=2582"
Category:
Cookies help us deliver our services. By using our services, you agree to our use of cookies.