presentation at Dance Up A Storm by Mary Jane Wood

First, I would like to publicly thank John Faulds for the honor he bestowed on me last year when awarding me the Golden Boot, Second I would like to thank John for bringing me out of the closet. Last year when he announced my name I noted that many people were looking to each other with questioning looks on their faces. Who in the blazes is Mary Jane Wood. Then someone, I think Ett McAtee, yelled out that's Woody. Yes, my real name is Mary Jane Wood. So once again, thank you John.

In talking with several Golden Boot winners, I was pleased to find that I am not the only one who is incoherent and unable to complete an English sentence. Therefore, I would like to take a few minutes to express what I wish I had been able to communicate last year.

When my partner of 30 years Pat was critically ill in the hospital, it was a square dancer, Arthur Morris, who either stayed with me or made sure that there was someone with me 24 hours a day. When it was time to say goodbye to Pat, it was square dancers Richard Tuck, Neale Grasham, Judith Stevenson, Lily Hickman, Don Queen, Larry Queen and Tommy Valdez who stood with me at Pat's bedside, each one saying their goodbyes to her.

When I made arrangements for the party that Pat wanted rather than a funeral, it was a square dancer/caller who not only called a two hour dance but also taught an abbreviated intro to square dancing so that Pat's non-dancing friends and family could participate in the activity she loved so much. That person was Harlan Kerr.

Shortly after Pat's death when it was time to go the the Toronto Convention, it was square dancers Neale Grasham and Howard Neckel that made sure that I had company on the pre-convention activities very similar to the one's that Pat and I had planned together. Niagra Falls, northern New York state and sites in Toronto. By the way, if you have never gone to the Corning Glassware Museum, you really must go, it is a place to see.

When the first major holiday other than the 4th of July, occurred, it was a square dancer/caller, Anne Uebelacker, who made sure that I had a place to stay among friends at her home while attending the Vancouver Fly-in over the Thanksgiving weekend (American, of course).

So you see why I say that I could never give back as much as I have been given. Thank you all.

All that being said, it is now time to award the Golden Boot to the 2012 recipient. I know that the usual format is for me to enumerate the many contributions that the person has made, leaving the most telling to the end, sort of a guessing game for the audience and the recipient. However, if I were to do that, the first things I say would immediately give it away and I want it to be a total surprise. So instead, I am only going to say two things.

First, I hope this person is a scotch drinker, because otherwise this very good bottle of Johnny Walker Blue is going to go to waste, and second, I have never figured out whether this person is the evil twin or the good twin, I give you Ms. Saundra Bryant. 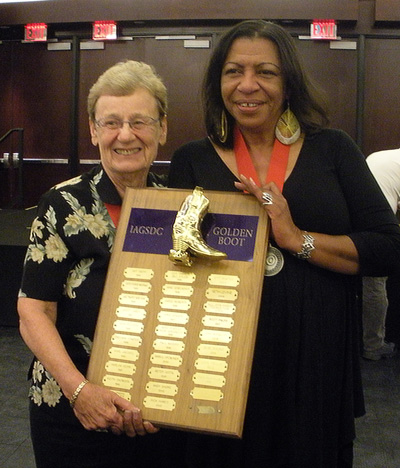 Retrieved from "https://iagsdchistory.mywikis.wiki/w/index.php?title=Golden_Boot_2012&oldid=4353"
Category:
Cookies help us deliver our services. By using our services, you agree to our use of cookies.