The Guide to IAGSDC Convention Chapter 24

Weird stuff you're really going to want to know

Like any community, lesbian/gay square dancing has its own traditions, institutions, and weird stuff that doesn't seem to make sense at first. Here's a FAQ (Frequently Asked Questions) about "Weird Stuff at Convention". 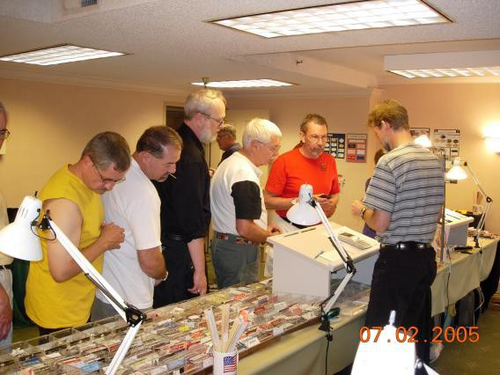 What's a "club photo"? It's traditional for each club at Convention to have a professional photograph taken of all members in attendance. Generally, dancers are expected to wear their club's formal uniform, if possible. (Check with your club for specifics.) At registration, you'll find out what day and time your club's photo is being taken. If you want to be in the picture, arrive at the photo location 15 minutes early, already dressed in your club uniform. Never "assume" that photo sessions will run late ... unless you really want to miss being in the picture.

What are "badge magnets"? If you don't want to put holes in your clothing to wear your badge, pick up a badge magnet adapter at the Fial's booth. It's a pair of strong magnets, one of which slips over the pin on your badge. You can also have your badge modified, with a magnet glued directly to the badge.

Who are "the Fials"? Robert & JoAnne Fial owned and ran R&J Fial Enterprises for many years. The Fials traveled all over the USA, from event to event, making badges for both the gay and straight square dance communities. They made both club and individual badges, along with generic and custom badge dangles, hanger bars, and similar accoutrements.

In 2005, Robert & JoAnne's son Gary McGrath took over the reins of the business. Later, Warren Mickelson changed the name from R&J Fial International, Inc. to The Badge Works.

What are "specialty tips"? These are dance sessions aimed at a very specific subset of dancers. Some examples: Bears, Women, Leather (wear your best/sexiest/most pleasing leather items and accoutrements), Munchkins (shorter dancers), Redwoods (taller dancers), Drag Tip, Medallion Tip (for those who have attended at least 10 conventions)., LJ'ers (people who blog on LiveJournal.com)...although in recent years, the "LJ Tip" has been replaced by the "Social Media Tip".

What are "workshops"? These are mini-classes, usually falling into a category such as: 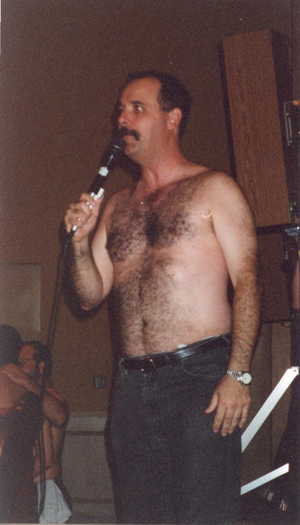 If a workshop isn't specifically designated as one of these levels, it's probably an "at level" session. It's better to ask and be certain than find yourself mistakenly taking an at-level workshop for a level you don't dance yet!

Workshops are a terrific way to round out your dance vocabulary at a given level. Callers are often more "playful" with the floor during a workshop than regular dancing, resulting in a more relaxed and fun atmosphere than a regular tip.

It is OK to approach a caller after a tip is over, to thank them if you had a good time, and/or ask questions about something they called. They'll appreciate the feedback, and are usually happy to give you pointers if you had a problem.

If you approach a caller at the very end of a dance session ... be aware that convention callers sometimes have tight schedules, and may need to change rooms quickly once a dance session is over. If this is the case, consider approaching the caller later. (Frank Yellin suggests that offering to carry their bag to the next room is an effective strategy for getting a couple of minutes of conversation with a caller.)

What's a "Golden Boot Award"? This is an award presented to an individual (or group of individuals) who have made outstanding contributions to LGBT square dancing over the past year. Each year's winner gets to select the following year's winner. The recipient is generally not told in advance that they've won the award, which makes for some emotional (but fun) reactions during the announcement. The Golden Boot is usually awarded during the Saturday night banquet.

Is that a square dancers' memorial quilt panel that I just saw in the corner? Yes. See the section entitled Remembering People Who Aren't Here Anymore for more information.

Waaah! That hot guy/gal in the corner can't remember my name! Gloria Krusemeyer suggests that you shouldn't expect people to remember your name, club, or location until they get to know you really well. Convention can be a bit overwhelming at times, and lots of people get "name-face association overload". Others just have bad memories. Don't take it personally, and wear your badge at all times in the hotel so people won't have to strain to remember your name.

Retrieved from "https://iagsdchistory.mywikis.wiki/w/index.php?title=The_Guide_to_IAGSDC_Convention_Chapter_24&oldid=25658"
Category:
Cookies help us deliver our services. By using our services, you agree to our use of cookies.