The Guide to IAGSDC Convention Chapters 25-26 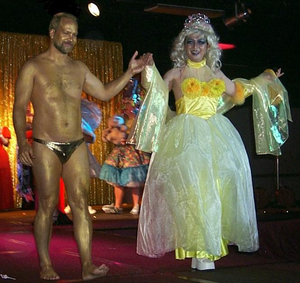 Los Angeles, 1999: "Oscar" walks a contestant down the runway during the HTQ Contest.

Each year, the LGBT square dance community (not, it should be noted, as an official activity of the IAGSDC®) holds a contest at Convention to pick a "Honky Tonk Queen."

Yes, it's a drag contest. Although using the terms "drag" and "Honky Tonk Queen" in the same sentence might be stretching the truth just a little.

The requirements for entry and participation vary from year to year, and are set up by the reigning Honky Tonk Queen.

Nothing says that contest requirements or format have to be fair, tasteful, or consistent. (And they usually aren't.)

The "winner" of the HTQ Contest at Convention "reigns" over lesbian and gay square dancing until the next Convention. (Conventions aren't always held twelve months apart.)

A spectacularly hideous crown made from a spray-painted, Christmas-tree-lighted, western boot is bestowed upon the lucky winner, who is expected to swan and vogue around the hotel for hours. (Kids, I couldn't make this stuff up if I tried.)

Some HTQs don't stop swanning and voguing for a full year...or even after they give up their crown.

Anyone in GLBT square dancing may be a HTQ contestant. Some HTQ contestants are men. Some are women. Some just plain aren't sure (and neither is the audience).

The HTQ Contest is, at best, an anarchistic event, with a suitable lack of selection criteria: 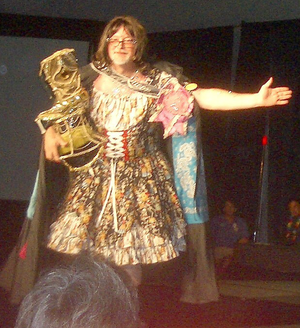 That last bullet point has nothing whatsoever to do with selection criteria – we just threw it in 'cause it was fun to remember...and every so often, some people still refer to him as "Oscar", which makes him wince.

The only consistent rule about HTQ contests seems to be that a new HTQ may not be selected from the same club as the previous year's HTQ.

Given the long memories (and grudges) associated with such events, it usually takes several years for a club to "recapture" the Crown.

At IAGSDC® events, you may hear people crying "Old Queen! Old Queen!" at random times. This signifies that a Former HTQ has just entered the room. (Occasionally, people will cry "New Queen!" when the current HTQ walks in, just because they can.) It is not necessarily in poor taste to join in the chorus, especially if you happen to know the Old Queen personally.

It should be noted that "Good Taste," "Talent," "Beauty," and "Honky Tonk Queen" don't necessarily belong in the same sentence. 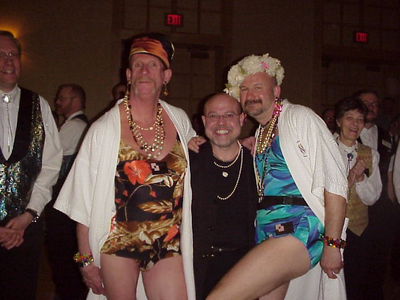 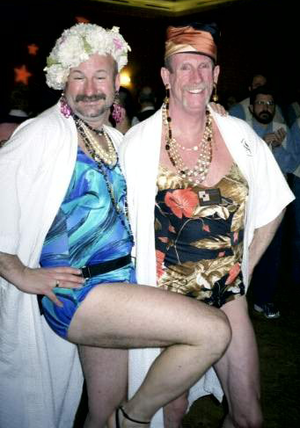 Depending upon who you ask, the Bathing Beauties are either an offshoot of or a related activity to the Honky Tonk Queen.

Unlike the HTQ Contest, anyone (generally, but not necessarily, male) can be a Bathing Beauty.

Becoming a Bathing Beauty consists of dressing up in a women's swimsuit – the louder and tackier, the better – bathing cap, sunglasses, flip-flops, and parading throughout the Convention at random times.

This could include anything from the Saturday night banquet to the hotel swimming pool to a random dance floor.

Bathing Beauties have been known to show up on Fun Badge Tours, at late-night hotel piano bars, and occasionally on "America's Most Wanted."

Occasionally they walk up to callers (Mike DeSisto is a favorite target) and start distracting them in the middle of a tip.

Retrieved from "https://iagsdchistory.mywikis.wiki/w/index.php?title=The_Guide_to_IAGSDC_Convention_Chapters_25-26&oldid=22883"
Category:
Cookies help us deliver our services. By using our services, you agree to our use of cookies.