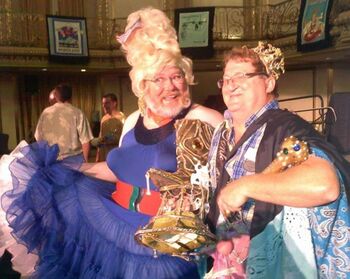 Ima Cornholer was the winner of the Honky Tonk Queen contest in 2010.
For personal appearances, please consult Wardson Lambert.

After many years of attempting to win the Honky Tonk Queen title, Ima Cornholer, from Michigan, finally won the crown in 2010. Nobody was more surprised than Ima, since she wasn't even entered into the contest.

Retrieved from "https://iagsdchistory.mywikis.wiki/w/index.php?title=Ima_Cornholer&oldid=16514"
Categories:
Cookies help us deliver our services. By using our services, you agree to our use of cookies.