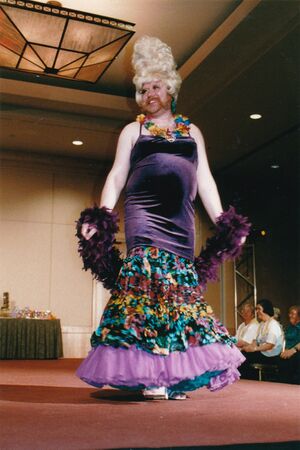 Virginia Hamm was the winner of the Honky Tonk Queen contest in 1997.
For personal appearances, please consult Ed Connolly

Many will remember an early Virginia Hamm appearance as one of the "Hilda"s in Dominique de Fontainbleau's epic entry into the 1992 HTQ Contest in Albuquerque.

Now here was a year so completely devoid of talent and imagination, we finally had to give the crown to Virginia Hamm, who literally won the lesbian judges over just by wiggling her little finger. Now, how was that for some sugar-cured audacity! This was also the year that we found out about Miss Anne Uebelacker could do some things with her fingers other than – well, whatever. The broad plays the accordion! Go figure!!! Somebody entered as Deborah Parnell (and honey, WHY???), Roseanne screeched and the rest is a blur – although Tami made a lovely showgirl!"[1]

Retrieved from "https://iagsdchistory.mywikis.wiki/w/index.php?title=Virginia_Hamm&oldid=16427"
Categories:
Cookies help us deliver our services. By using our services, you agree to our use of cookies.