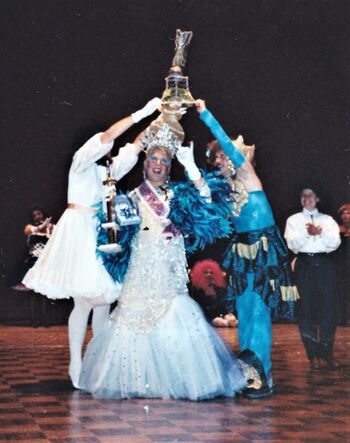 Tami Wynotte was the winner of of the Honky Tonk Queen contest in 1989.
To protect her privacy and preserve her aura of mystery, Tami uses the services of Bob Young as her social secretary.

Tami detailed her fabulous reign (SO EXCITING!) in a monthly column "Thrown From The Throne", published in the Times Squares newsletter from Oct 1989 to Apr 1990. Like some later Queens, her reign was less than a calendar due to to the early schedule of the 1990 Vancouver convention Northstar Promenade.
Tami went on to host the HTQ contest several times with co-conspiratrix Lois Carmen D'Nominator.

Miss Pam Demonium shocked the entire square dance community by performing the first really intelligent act of her otherwise boring and uninspiring life. She d1dn't show up in New York. This was incredibly wise for two reasons. One, it would have surely hurt her feelings to realize that absolutely no one remembered her or cared that she had shown up and two, it gave SYBIL the microphone AGAIN! This came about due to the incredible genius of Miss Wella Balsam. Wella is one of those girls that every important organization needs. She was that hard working and dedicated person who kept the whole thing going. Of course this dynamic personality was an over-compensation for a basically drippy, wallflower psychological make-up. I mean the poor thing had been a total nobody, completely overlooked her entire life if she had depended on her looks, but what the hell it kept the whole thing going. And what a thing it had become! In the Big Apple we took over the main ballroom. The huge room was packed with over 700 people, over 40 pathetic has-been contestants and ME! This year the winner was a classic example of the power of the sympathy vote. The previous year she had shown up in a scraggly little grass skirt, bare footed, sporting a coconut bra and no hair. To compensate, this year she came dressed to the max with enough hair to make Steffany gag. (Ms. Steffany continued to hover around the pageant much like an overdone moth flitting around a flame she could never attain. This year she brought the Bradley sisters. It 1s rumored these harpies were the result of a torrid and absolutely disgusting long-standing lust-fest between Steffany and the entire male population of Des Moines, but it's probably Just a nasty rumor, not anything I would want to get around.) Yes Miss Tami Wynotte, a homely - I mean home girl - certainly did herself up to beat the band. I would like to say it helped improve her basic looks, but why lie. Anyway, everybody felt so sorry for her she won.[1]

Retrieved from "https://iagsdchistory.mywikis.wiki/w/index.php?title=Tami_Wynotte&oldid=16414"
Categories:
Cookies help us deliver our services. By using our services, you agree to our use of cookies.