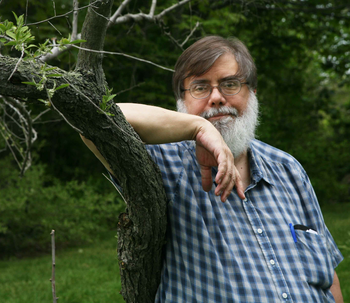 John hails from the East Coast, having grown up in New York. In 1971, his freshman year at the Massachusetts Institute of Technology, he joined Tech Squares and learned to dance; by 1973 he was teaching square dancing as a gym class. A move to California in 1980 led to a lively schedule of Challenge dances and workshops. A founder and current caller for the Stanford Quads, John also travels widely, calling weekends around the country, and serves as a permanent staff member at the American Advances and Challenge Convention.[1]

John was born on March 27, raised in NY and attended MIT receiving a BS in Computer Science & Engineering. By 1982 John relocated to Oakland, CA. In the 1980s John founded Venue a software development company dealing mainly in LISP. Since 1997 John and his wife Jill developed other software ideas for Venue.

While attending MIT, John learned to Square Dance. By 1973 he was calling and teaching others. John advanced to calling C4, the highest level in Square Dancing. John met his wife Jill through square dancing as she too is a caller.

Together they taught dancers and traveled calling all over the world. John also called locally for 3 clubs. John joined Callerlab in 1979 and was elected to their board of governors in 1988 and has served continually since then. Jill, who is a genealogist, did John's family history and proved John's connection to many famous relatives and veterans of the Revolutionary War and the War of 1812.

Due to Jill's efforts John joined Sons of the American Revolution (SAR) via his 4th great grand father Thomas Wason.

A memorial service and square dance will be held at a future date.

Retrieved from "https://iagsdchistory.mywikis.wiki/w/index.php?title=John_Sybalsky&oldid=20049"
Categories:
Cookies help us deliver our services. By using our services, you agree to our use of cookies.