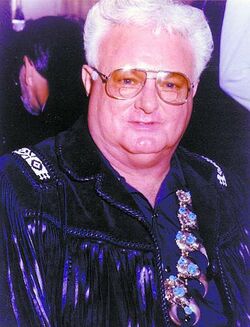 Ward, 77, moved to Northern Nevada from Los Angeles and Orange County in 2008, when he started his ballroom and square dancing classes.

Ward learned square dancing in school and became a caller as a 12-year-old. In his 60 years of dancing, he learned ballroom dancing, worked at movie studios and helped form the B-Sharps square dancing group — still active after 55 years. He taught dance in Los Angeles and Orange County before moving to Nevada.[1]

Larry Ward, who passed away on Monday January 6, was a great caller back in the days when entertainers of all types stayed firmly in The Closet. I remember when he called for either Western Star or Foggy City at the old YMCA in SF and they decked the piano in the hall out with a candelabra in honor of his "Liberace of Square Dance Callers" nickname.

He called for the 1997 Convention in Las Vegas, the only other gay-oriented gig I remember him calling. Sometime earlier in that year, I was at one of his big dances in Newark CA. Went up to him after the dance to thank him and then added "see you over 4th of July". Poor man paled. (It wasn't on his published schedule, of course.) How sad.
— Joyce Robinson, 09 Jan 2014

Trailer for documentary about Larry

Retrieved from "https://iagsdchistory.mywikis.wiki/w/index.php?title=Larry_Ward&oldid=21420"
Categories:
Cookies help us deliver our services. By using our services, you agree to our use of cookies.