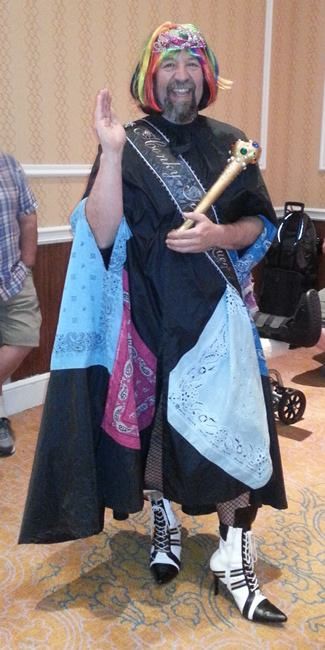 Mary,Wanna? with her cloak and scepter in 2015

Mary,Wanna? was the winner of the Honky Tonk Queen contest in 2015.
There are unconfirmed allegations that Mary,Wanna? is actually the superhero disguise of an itinerant caller named Gary Monday. So far, nobody has stepped forward to confirm or deny these charges.

The mysterious Mary,Wanna? appeared from nowhere to sweep the 2015 Honky Tonk Queen contest with her sung-live performance of "All About That Bud", with original lyrics sung to the tune of All About That Bass. Mary was accompanied by three anonymous beefcake dancers known informally as The Hunky Trunk Boys.

There are rumors that the HTQ judges (Anne Uebelacker, Sandie Bryant, and Dayle Hodge) may have been bribed, but since all of the evidence went up in smoke, we'll never know for sure.

Retrieved from "https://iagsdchistory.mywikis.wiki/w/index.php?title=Mary,Wanna%3F&oldid=16086"
Categories:
Cookies help us deliver our services. By using our services, you agree to our use of cookies.