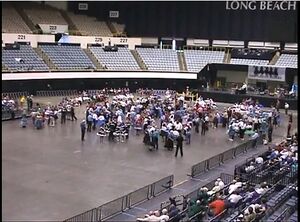 The Rainbow 8's was an informally-gathered square of GLBT and straight dancers from the Rainbow Room who won a competition at the 58th National Square Dance Convention held in Long Beach, California in 2009.

As I was thinking about the history project, a subject came to mind that may otherwise be overlooked, because it occurred in the straight world.

At the Long Beach National Square Dance Convention 2009, competitions were held for the first time. People were encouraged to gather 8 people in a square and sign up to compete against others dancing (very) hard Mainstream.

Long Beach also had a Rainbow Room where GLBT and GLBT-friendlies danced each day. I danced often in that room along with my daughter who was just beginning to dance that weekend.

Mark Ambrose approached me at one point in the Rainbow Room and asked if I might be interested in dancing in a competition square with him.

I signed up along with Joyce Robinson, Patricia Wahle, Jane Clewe, Fran Hunt, Michael Priser, and Steve Morgan, who were possibly the less experienced of our group. This was quite informal and laissez-faire, to the point where as we were gathering for the competition, several of our group were nowhere to be found. We called our square the "Rainbow 8's".

We were assigned a square number and given colored ribbons to pin to our backs so our judge could identify the couple numbers and gender to make certain we really made the sequences and got back home.

Roy Stevenson was our judge. Randy Dougherty called the first tip, which lasted a little more than 5 minutes and brought a packed floor down to just five finalist squares.

My corner (who was one of the guys I didn't know) was like a deer in the headlights on Cloud 9. He was having such a great time and amazed that we had made it so far.

My only regret was not going up to the stage and announcing to the watching public that they were welcome to join us in the Rainbow Room for some more high-energy dancing!

Retrieved from "https://iagsdchistory.mywikis.wiki/w/index.php?title=Rainbow_Square_in_2009_Nationals&oldid=20692"
Category:
Cookies help us deliver our services. By using our services, you agree to our use of cookies.