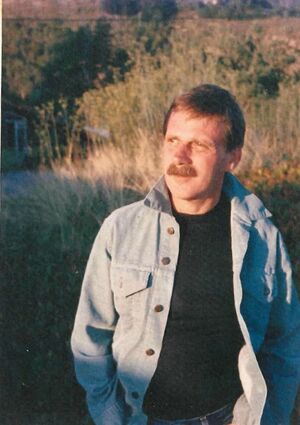 Bob Bellville was club caller for Western Star Dancers from 19??-??. He authored the call Rock The Boat which became a CALLERLAB quarterly selection. He was a member of Square Dance Callers Association of Northern California (SDCANC) and CALLERLAB, and is believed to be either the first (or one of the first) openly gay member(s) of CALLERLAB. He also may still, even as of present day, be the only openly gay caller to have achieved CALLERLAB Accredited Caller certification.

Bob Bellville
Dec. 30, 1941 - April 10 1990
Bob died peacefully after a valiant two-year battle with AIDS; by his side was his lover of nine years, Chris Anderson.

A native of Rhode Island, Bob served for four years as a corpsman in the U.S. Navy before moving to California in 1963. He came to San Francisco in 1970 and was employed for many years by Levi Strauss and Koret. He was a past president of the Knights of Malta MC, a member of the Western Star Dancers, Gold Rush and Midnight Squares and was a Shanti emotional support volunteer.

This gentle, caring impulsive man loved square dancing and had a special passion for square dance calling; his sudden smile (and wicked patter) could light up a whole dance floor. He was especially proud of being the first openly gay called to be inducted into the Square Dance Callers Association of Northern California, and to be accredited by Callerlab, the international callers association.

Bob is deeply missed by the Bellville and Anderson families, his close friend Anna Damiani, former lover Jim Bilbrey, and many dear friends.

Services were held April 12, and Bob was buried on a hilltop near the Marin Headlands. A gathering of his friends will be held on Saturday, April 28, 12 to 3 p.m. at "Hartford House"; for further information call 621-5631. Donations may be made to Shanti Project.

Good Bye, Teddy Bear! On April 10, 1990 our own Bob Bellville lost the long battle that he had been fighting. We all lost a good friend.

He will be long-remembered by a lot of friends, in particular his lover of nine years, Chris Anderson. Bob was a member of Western Star Dancers in San Francisco. He was also the first openly gay caller to become a member of the Northern California Callers' Association. He was extremely proud of that. He was also an accredited member of CALLERLAB.

Bob's call "Rock the Boat" was an Experimental for many months and then went on to become a Quarterly Selection. Hearing other callers use it gave him a special delight.

What a lot of people didn't know about Bob was how much he wanted to share his knowledge and eperience with others. For several years, Bob donated his time to help teach students at Western Star. He loved to teach.

In spite of his illness, Bob spent many Sunday afternoons working with club callers. He helped new callers and more experienced callers alike. He gave us many pointers and a lot of encouragement. It made him happy to do this.

I will always remember him singing his favorite song - "I Wish I Was a Teddy Bear."

It was just over a year ago, at the joint Western Star/Foggy City dance last January 7 (2006), that caller Dick Henschel happened to workshop the call Rock The Boat. He didn’t know who wrote it, just that it had been a popular CALLERLAB Quarterly Selection back in the ‘80’s, and he thought it would be a fun novelty item to teach.

As it happened, Stewart Kramer of El Camino Reelers and I were already familiar with the call, and had known Bob Bellville, the man who created it. Only the old-timers among us remember Bob and his accomplishments as a gay square dancer and gay caller, but on the occasion of our 25th Anniversary, it seems a good occasion to explain his place in our history, and I’ve asked Bill Hanzel, his mentor, and Andy Shore, who followed in the trail Bob helped blaze as an openly gay caller, to join me.

Bob learned to square dance at Western Star’s fourth Mainstream class, graduating in December 1983; he was Archangel for the next class. He quickly continued on through the Plus and Advanced levels, and was one of the most active members of both Western Star and Midnight Squares throughout the 1980s. His interest in teaching led him to seriously study calling. He didn’t have a particularly strong singing voice, and chose instead to concentrate on his forte, devising creative hash choreography. He became Western Star’s Mainstream and Plus instructor in the late 1980’s, until declining health from AIDS-related causes forced him to cut back. Bob passed away in Spring 1990.

Bob’s class was the first Western Star class to be taught by Bill Hanzel, the husband of Janice Hanzel, founder and choreographer of the Barbary Coast Cloggers. Bill had never called for a gay group before, but was willing to give it a try despite the technical difficulties of sight-calling same-sex couples, and the risk of getting flak from his peers (still very much a reality in the early 1980s).

Bill became our primary liaison with the straight square dance community, and also became Bob’s mentor, encouraging his interest in calling and helping him through the process of becoming an accredited caller. I’ve asked Bill (who now lives in Denver, but is planning to fly out and join us in March) to share some of his thoughts about Bob, and here they are, followed by Andy Shore’s:
— Russ King [2]

I met Bob when I started teaching for Western Star Dancers. He had an interest in calling, and when I was asked by some members to start a callers class, Bob was a part of it. He would share with me some of the things he was working on and asked questions about making choreography flow comfortably.

He wrote the move Rock The Boat. It was a good call which flowed better than “Load the Boat.” CALLERLAB picked up the call and it was put on the Quarterly list of new calls. It stayed there for at least three quarters. Many calls are on the list for one quarter and disappear, but not Rock The Boat.

In 1985, Bob applied to the Square Dance Callers Association of Northern California (SDCANC) and began attending meetings. He learned from many top callers in the Northern California area. He polished his presentation by calling in front of his peers and receiving their critiques and encouragement. After completing his apprenticeship training he was voted a Caller member of SDCANC. Before he got the news, I was able to get his badge from the engraver and made arrangements to present it to him at the 1986 IAGSDC Convention in San Francisco.

Working with his partner Chris Anderson, we decided to give Bob his badge at the convention dinner. When I called Bob to the stage, there was a standing ovation. He became the first openly gay caller in the SDCANC.

Bob and I attended the CALLERLAB convention in Reno in 1988. This was the first time Bob met many of the nationally known callers. He learned much more at Reno, more than he knew. When callers learned that he wrote Rock The Boat, Bob walked a little taller. The acknowledgment from top name callers, was tremendous. I think I saw new pride in Bob that weekend.

The following week, Chris called me and gave me the bad news: Bob was diagnosed with HIV. That was like getting a punch in the gut for me. I know I shed a tear or many for Bob, and I knew I would eventually lose a friend. I kept in touch with Chris when I could, to check up on Bob. The news finally came that Bob had passed and Chris said that Bob wanted me to be a pallbearer. It was a great honor for me.

These are my memories of a good and gracious being, Bob Bellville. I will forever remember him as a friend and colleague. Square dancing will miss the calls that were never written because of his loss. Friends miss the presence of Bob Bellville. I miss not being able to work with him more and learn more from him. Peace Bob
— Bill Hanzel

I learned to square dance with the El Camino Reelers. I was in their 3rd Mainstream class (1986-1987) and our teacher was a big straight guy named Bill Hanzel. I liked Bill, and I thought he was a pretty good teacher and caller, but somehow, as a beginning dancer, I had this notion of “oh – straight people call for us.”

This notion was blown away one night when Bill couldn’t be at class and arranged for a substitute caller. Bob Bellville, a gay caller from San Francisco, came down with his partner Chris and taught our class that night. I remember being very intrigued with a “wow – we can be on that side of the microphone too” feeling. So I’d have to say that Bob was my earliest inspiration and role model for being a gay square dance caller. A few years later, when I was starting to call, Bob held some calling workshops up in San Francisco. It was great having his insights and just having the opportunity to learn and practice calling.

Bob was an openly gay member of CALLERLAB, the International Association of Square Dance Callers. I believe he is the only openly gay caller to ever achieve the status of a CALLERLAB accredited caller, a rather obscure and rare status. Few callers seem to know of or attempt this these days, but it was a big deal 20 years ago.

Bob was also a member of the Square Dance Callers Association of Northern California, and he wrote the call Rock The Boat as part of his membership application and qualification. Rock The Boat became popular and earned the status of a quarterly selection (an experimental call in wide use) for a time. I still hear it cued today: Ends Load the Boat while the Centers Single Circle to Wave, Fan the Top, and Extend.

Bob was one of the first generation of openly gay square dance callers, whose contributions to the formation and success of the IAGSDC cannot be overestimated.
— Andy Shore

Memories of Gold Rush
BOB BELLVILLE and Bill were very patient. They walked us through so many moves we thought we'd never remember them all. Bob would do the "Hash" part of the night and Bill would do the "Singing". Thank God! Bob's voice was not the best. But, I'll never forget his favorite song, "Black Coffee". Towards the end of the lessons Bob became ill. While living in New York, I wasn't exposed to AIDS or HIV. This was the first time that someone I knew got sick. Bill told us that Bob would appreciate cards or a visit while he was in the hospital. I brought him a small bag of "cheer-up stuff". Little puzzles, coloring books, a porno magazine, etc. He enjoyed it all a great deal and recovered enough to come back to Western Star for a short while. During this time, I was asked to join Gold Rush. Bill was one of their callers and other Western Star members were also on the Team. Bob was also made an honorary member of Gold Rush and briefly called for the Team. As we were getting ready for the 1990 Square Dance Convention in Vancouver, Canada, Bob took a turn for the worse. While we were at the airport we received word that he had passed away.
— Joe Sobiesiak[3]

Retrieved from "https://iagsdchistory.mywikis.wiki/w/index.php?title=Bob_Bellville&oldid=23495"
Categories:
Cookies help us deliver our services. By using our services, you agree to our use of cookies.