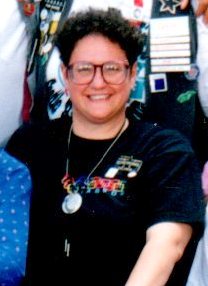 This is the ninth one of these little babies I have produced. I am driven to do it each year because more and more gay square dancers grow to depend upon it. I guess the Travel Guide is a surrogate for my mothering instincts. In 1986, I decided to dedicate each edition to someone who has contributed substantially to our activity. The time has come to cease this annual acknowledgment because the efforts currently being exerted in the development of new clubs and the perpetuation of the existing ones is enormous and the responsibilities are being carried by a legion of volunteers.

So, this final dedication is to the several people who have for the longest period of time nurtured not only the gay square dance activity but also me personally. If everyone of you could have friends like SCOTT CAREY, ANNA DAMIANI, and JAMES FOWLE, you would love life, love each other, and most importantly love yourselves. It is impossible for me to feel alone or isolated. These people know my spirit and sense my needs. We are family. We are all Cancers. Need I say more? Thanks, dearest friends, for making me the "happiest [person] in the whole USA."[1]

In 1993, Keith Snowdon presented Anna, Bill St. John, and Stan Boyden with the Golden Boot Award.
In 1994, they presented the award to Bill Eyler and Luis Torres.


Anna Damiani, who worked for many years as a district aide for gay former state lawmaker Mark Leno, died at her Castro district home February 25. She was 65.

Ms. Damiani, a lesbian, was well known to community members and others for wearing her trademark purple or lavender attire.

In a phone interview, Leno told the Bay Area Reporter that Ms. Damiani worked for him during his entire 14 years in the Legislature, first in the Assembly, and then the state Senate.

"She was a marvel," Leno said. "She had an indomitable spirit. She always represented our office with a big smile, huge hug, and was well-informed. She communicated her concern for the community in every action."

"It was my great fortune to know Anna and work with her all those many years," he added. "She was an inspiration."

Ms. Damiani served on the Alice B. Toklas LGBTQ Democratic Club board, which posted a message on Facebook.

"We loved Anna for her dry wit, exuberant laugh, warm heart, and passionate love of all dogs," the post stated in part. "Anna could almost always be found in the mornings at Spike's on 19th, usually surrounded by her canine fan base, and always wearing purple. She was the living embodiment of the poem that she had displayed in her office, 'When I Am an Old Woman I Shall Wear Purple,' a warning of nonconformity."

Ms. Damiani, who at the time of her passing worked at San Francisco International Airport, had diabetes, but that didn't stop her, as Leno noted. While she spent much of the last two years working remotely due to the COVID pandemic, Leno said that Ms. Damiani used her wheelchair to get to the bus then get on BART to arrive at the airport.

Gay Castro business owner Patrick Batt wrote in an email that he had seen Ms. Damiani in passing a couple of weeks ago.

"I knew Anna by sight and, having worked for Mark, we always chatted and said 'Hello' when we encountered each other on the streets of the Castro," Batt wrote. "She, always in some shade of purple, and fearlessly navigating the streets in her wheelchair. This is sad news."

Before working for Leno, Ms. Damiani worked for former assemblymember Kevin Shelley (D-San Francisco) for a year, according to a resolution presented to her in 2017 by the San Francisco Commission on the Status of Women, commending her many years of service to the community.

Ms. Damiani also served as board president of the Golden Gate Business Association, an LGBTQ chamber of commerce.

As president of GGBA, Ms. Damiani helped to publicize the organization. In a 2001 essay for the B.A.R.'s Pride issue, she wrote that LGBTQ business owners weren't always welcome at the San Francisco Chamber of Commerce. "Twenty-seven years ago, a group of LGBT business owners and professionals were looking for ways to increase business and market their products to a broader audience," she wrote. "When they attempted to join the San Francisco Chamber of Commerce, the reception was far from cordial."

These LGBTQ business leaders went on to form GGBA, which became the world's first LGBTQ chamber of commerce. Today, many queer business owners also belong to the San Francisco Chamber of Commerce.

"The formation of GGBA was significant for several reasons," Ms. Damiani wrote. These included economic empowerment and support.

Terry Beswick, a gay man who's executive director of GGBA, said the loss of Ms. Damiani was heartbreaking.

"I'm personally deeply saddened at the loss of Anna Damiani, who has been a ubiquitous presence in my life and in the Castro for many years," Beswick stated in an email. "She was president of the board of the Golden Gate Business Association in the early 2000s during a time of great change and growth for the organization, and while also serving on the board for San Francisco Pride.

"She was a community leader for many causes who did not seek the limelight, but was the best kind of leader, the kind who sought to be of service to others," Beswick added. "Clad in her trademark purple, Anna could be counted on to show up and to lend support where it was needed most."

According to the city resolution, Ms. Damiani made San Francisco her home over 40 years ago, "at a time when Anita Bryant led a political coalition to repeal anti-discrimination measures protecting the rights of the LGBT community in South Florida." She soon became a strong advocate for women's and LGBTQ resources while working at Pacific Bell, where, as a technician and later operator, she served as shop steward for the Communications Workers of America and rose through the ranks.

The resolution noted that Ms. Damiani's advocacy work at Pacific Bell led to strong support for domestic partner benefits "throughout Pacific Bell's family of companies, an expanded marketing strategy for the LGBT community, and several statewide and local conferences designed to increase the power of women and members of the LGBT community."

San Francisco Commission on the Status of Women Resolution Recognzing Anna Damiani[4], 17 May 2017

Just heard about the passing of one of the kindest friends I had through square dancing, Anna Damiani. So sad to hear this news. She was such a live wire back in the day and has always been very politically active! She presented Lu Torres and me with the '94 Golden Boot Award.
— Bill Eyler

Oh no.... she was SO instrumental and helpful to me in my first few years of dancing. Freeman Stamper ... RIP, Anna.
— Ett McAtee

Sad news. Anna was such a welcoming presence back when I started square dancing, and a real asset to the early days of the IAGSDC
— Andy Shore

I chatted with her in the neighborhood or on the bus sometimes. I didn’t even know she was a square dancer
— Gary Young

Gary Young me too. I remember her from Spike’s when I used to dog sit for a friend in the neighborhood.
— Reed Vernon Waller

She was around when I began square dancing. She always had a positive attitude. She stayed around until she got involved with Tom Ammiano. 😪😪
— Felix Fornino

Thanks for letting us know, Bill. I remember when she, along with Stan & Bill, received the Golden Boot in Seattle in '93. Got a chance to chat with her a bit in SF at the Marriott.
— JW Paulson

Such sad news. She was such a vibrant personality and a true advocate of our community for so many years. Fly high Anna 💕
— Anne Uebelacker

I first met Anna when I hosted her (and Ed Ziegler and another dancer whose name escapes me) in Portland for a Rosetown Ramblers fly-in in the early 1990s. I last saw her when I serendipitously ran into her on Castro Street about 5 years ago. Such a dynamic and sweet woman. Such a huge and sad loss.
— John Oshin

Thanks for letting us know, this is truly such tragic news. I have known her since the 80s My sincere condolences ❤
— Chris Phillips

That is very sad. She was a warm and welcoming figure in our community.
— Bob Young

Such sad news. We have lost yet another Golden Boot.
— John Faulds

Such a big loss for the world🥲
— Cricket Matheson

Thanks for sharing this Bill. I have fond memories.
— Robin Alpenglow

I’m so sorry to hear this. Anna was one of the very first people I met when I got involved with gay square dancing. Her presence will be sorely missed.
— Paul Waters

That's sad news. Anna was also one of the first people I met, and was the very first through the door when we had our first fly-in.
— Don St. Jean

My sympathies to you and her family and friends...
— Peter Huschilt

I remember Anna. She was one of several key voices who, in 1993 -- Seattle IAGSDC Convention -- volunteered to aid the Gay Callers Association. She helped to write its Constitution and By-Laws--along with Bill Eyler, Janna Hollingsworth, Don Williams, and me (I apologize, I have forgotten 1-2, sorry!) She offered valuable insight and perspective to our committee. Together, we had a highly successful, smoothly run and accomplished group that presented the two documents; these were passed and thus GCA formally (it informally existed for at least a few years previously!) into being! I shall miss her sense of humour. Until we see you again Anna: Have a heavenly Do-Sa-Do!
— RD Frankel

Saddened at the passing of Anna Damiani, a powerful and steadfast advocate in San Francisco. Anna championed women’s rights and LGBTQ equality for decades. May her memory continue to be a blessing to her family, loved ones, and the community.
— Nancy Pelosi[5]

Retrieved from "https://iagsdchistory.mywikis.wiki/w/index.php?title=Anna_Damiani&oldid=24695"
Categories:
Cookies help us deliver our services. By using our services, you agree to our use of cookies.