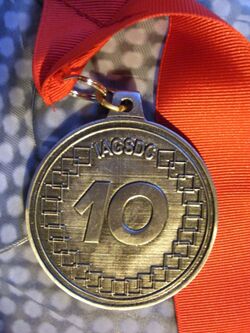 The IAGSDC Medallion Project was created by Freeman Stamper to provide dancers with a straightforward, attainable goal to provide a sense of achievement in square dancing.

When a dancer (or non-dancer, caller, or vendor) has attended 10, 20, 25, or 30 IAGSDC Conventions (total, not consecutively), they are awarded a medallion in recognition of their support of and commitment to GLBT square dancing.

The medallion itself is a metal disk showing the years of attendance (consecutive or not) and interlocking squares representing the continuity of the clubs who are members of the Association and linking of the clubs to their IAGSDC commonality. The ends of the chain are not connected to each other to represent the ability of the Association to expand, while the curved formation represents the laural branches of achievement. On the reverse is an arrangement of triangles representing the fact that the gay community is the background of the IAGSDC. In addition, the medallion is inscribed with the recipient’s name and year of receipt.

At each IAGSDC Convention, there is a Medallion Project table. At the table are a set of books with all attendees' names from all past Conventions. Attendees are asked to find their name, verify their contact and attendance information is correct, and make any needed changes. The books are printed out from a master database maintained by Rick Hawes (from 1998 to 2018) and Keith Gehrig (2018 -). The set of books prepared for the 2013 convention in San Francisco consisted of approximately 800 pages with roughly 7,000 name entries. As of February, 2020, there are over 7,200 names in the medallion database.

Previously, when a dancer reached a medallion level, they were notified by “Stepmother Medallion”--a position occupied from 1998 to 2018 by Rick Hawes--that they were eligible to receive their medallion.

According to Stepmother Medallion, as of the 2007 Convention, a total of 553 Ten Year and 49 Twenty Year Medallions had been handed out. This number was updated by Stepdaddy Medallion to 1,360 medallions handed out as of the end of the 2019 convention in Philadelphia.

Funding for this project began privately at first by Freeman Stamper and then Rick Hawes. As of 2007, the Medallion Project has been funded (in part) by the IAGSDC.

Retrieved from "https://iagsdchistory.mywikis.wiki/w/index.php?title=Medallion_Project&oldid=19806"
Categories:
Cookies help us deliver our services. By using our services, you agree to our use of cookies.