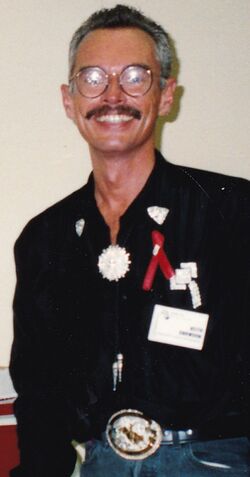 In 1992, Harlan Kerr presented Keith with the Golden Boot Award.
In 1993, Keith passed away several weeks before the next convention, and so Lauro De Haan presented the award to Anna Damiani, Stan Boyden, and Bill St. John.

SNOWDON — Keith Allan, April 28, 1953-May 17, 1993. Keith passed away peacefully amongst friends, at the Normandy Hospital Special Care Unit. He is survived by his mother and father, Grace and Reginald, brother and sister-in-law Kenneth and Cheryl, sister Connie and many nephews and nieces. Keith worked for 15years in the Emergency Department of the Vancouver General Hospital and was an avid Square Dancer for many years. For his work in promoting Square Dancing in the Gay Community, he was recognized by the International Association of Gay Square Dance Clubs in 1992. He will be missed by his numerous friends, both socially and professionally. Special thanks to Dr. W Kendall and the staff of the Special Care Unit of Normandy Hospital. As per Keith's wishes, there will be no Memorial Service. A celebration of Keith's life will be held on Saturday, August 7, 1993 at a location to be announced. In lieu of flowers, donations can be made to the PWA Society or the AIDS charity of your choice.[1]

IN MEMORY OF GRACE PINE
She is Just Away...
You cannot say, you must not say...
that she is dead. She Is just awayǃ
With a cheery smile and wave of the hand...
She has wandered into an unknown land...
And left us dreaming how very fair...
It needs must be, since she lingers there...
So think of her faring on, as dear...
In the love of There as the love of Here.
Think of her still as the same, and say...
She is not dead, she is just away.
Lovingly, your sisters, Cashmere, Brenda, Solange.[2]

Retrieved from "https://iagsdchistory.mywikis.wiki/w/index.php?title=Keith_Snowdon&oldid=24904"
Categories:
Cookies help us deliver our services. By using our services, you agree to our use of cookies.