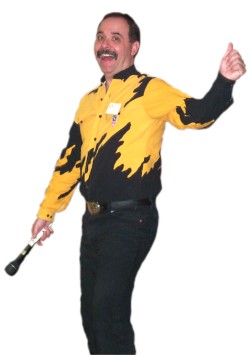 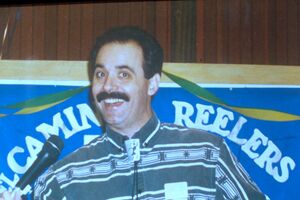 
Received the Golden Boot Award from Anna Damiani, Stan Boyden, and Bill St. John in 1994 and passed it on to Anne Uebelacker in 1995

From the Program Book of the 8th IAGSDC Convention, held in Miami, FL in 1991:
Mix and match facts: Nicknamed "Billibob" and "Silver Throat". Age 36. Currently beardless. Interest piqued in gay square dancing in 1983. Coerced into teaching 1984. In his addiction, also learned clogging, round dancing, C&W, Latin dancing. Currently club calling in Santa Fe and Albuquerque three nights a week, and guest calling several dozen times per year wherever the winds take him.

Self-employed as a small business accountant, but first love is calling and dancing; aspirations of full-time calling. Second love is the frustration of gardening in a desert climate.

Graduated from Louisiana Tech University, a fascinating study in small town colleges. Coincidentally, this is the rival college of Freeman Stamper's Alma Mater of Northeast Louisiana University, a mere 30 miles away. (He graduated years earlier, though!)

Happily attached to his lovely dance partner, Jim Bialey, for over 12 years, going on a lifetime.

Have definite opinions that everyone should be exposed to Friendship Set to Music!

In 1994, Anna Damiani, Stan Boyden, and Bill St. John presented Bill and Luis Torres with the Golden Boot Award.
In 1995, Bill and Luis presented the award to Anne Uebelacker.

Retrieved from "https://iagsdchistory.mywikis.wiki/w/index.php?title=Bill_Eyler&oldid=19329"
Categories:
Cookies help us deliver our services. By using our services, you agree to our use of cookies.