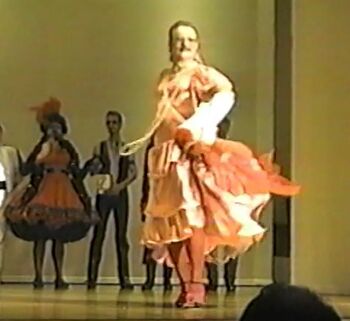 Carmina Putana was the winner of the Honky Tonk Queen Contest in 1991.
For personal appearances, please consult Terry Thorpe.

1992 Albuquerque
We Dance Where?

Albuquerque - you know we’ll never forget it. We just can’t say enough about Albuquerque - well, none that’s fit for printing, anyway. It would have behooved the Committee, however, to find out that during the 4th of July weekend Albuquerque CLOSES!!! COMPLETELY!!!!! A last-one-out-turn-off-the-lights type of closed! Please forward our mail, and thanks for coming.

Once again, though, off the A train of thought. The contest was run by Dominique de Fontainbleau (and, once removed, Tami), who chose opera for the contest’s theme. They entered the stage area by descending on the escalators, with hundreds of extras, in a grand “Wagnerian” fashion. While we waited and waited for the Queen’s costume changes, Albuquerque marks the first time that Lois entered the Honky Tonk Queen contest, with a lengthy group of SheDevils in tow. She also notes that, if it hadn’t been for the carefully placed ringers in the crowd chanting “Lois, Lois,” she would have been booted out with the other first round losers. Strategy is everything.

Lois ended up in an operatic duel with Carmina Putana, the eventual winner of the contest. Lois reports that she NEVER wants to have to use plastic vomit and toilet paper as props again.[1]

Retrieved from "https://iagsdchistory.mywikis.wiki/w/index.php?title=Carmina_Putana&oldid=16417"
Categories:
Cookies help us deliver our services. By using our services, you agree to our use of cookies.