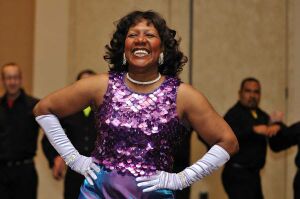 The reigning Queen, Moolena, did not attend the 1994 convention in Washington DC. So Curlique, as the previous year's runner-up was elevated and became "Queen for a Day" and hosted the Honky Tonk Queen contest that year.

As Honky Tonk Queen Mum, I knew Pauline for many years. She was always available for absolutely anything. She was big, brash and impossible to embarrass. I’ve noticed some people reminiscing about her performance of Push De Button, which was a song I recommended to her after her magnificent Let’s Get This Party Started. She loved it and I loved watching her perform it. It is hard to believe that all of that love, energy and enthusiasm is gone … and way too soon.
— Bob Young

Retrieved from "https://iagsdchistory.mywikis.wiki/w/index.php?title=Curlique&oldid=25061"
Categories:
Cookies help us deliver our services. By using our services, you agree to our use of cookies.