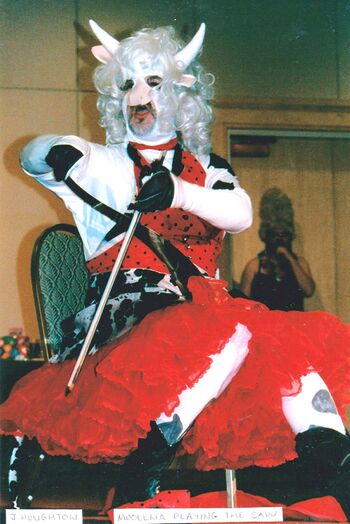 Whatever it takes to win the crown - saw playing!

Moolena was the winner of the Honky Tonk Queen contest in 1993.
For personal appearances, please consult Doug Cameron.

1993 Seattle
College Bound Again
Let’s see - who ran this contest? Does anyone remember? Does anyone care? Carmina the Whore!! Ah, yes, it all comes back now, like a dream after bad refried beans! The contest was won by a cow. The lovely Moolena of Vancouver, BC, all drippy with jewels. Oh yeah, and they held the contest at the crack of screech (Noon) on a Saturday. Don’t know about y’all, but it’s against my religion (and all the gods of dragdom) to put on artificial lashes before 4PM, unless its Gay Pride Week, daytime festivals where hot men without their shirts on might cuddle up and get their pictures taken with you, or you’ve had a really bad day and you need to feel beautiful. Let it be stated for the record, however, that this really was the first time that an actual talent was performed by a contestant. Saw playing - now there’s one for the books![1]

1994 Washington, DC
Out of the Secretarial Pool, and Out of the Swimming Pool, Too!
Moolena had gotten a little too close to a meat grinder and was served up on a platter for this contest. (You might say that instead of a tartan, she wore a tartare!) For the first – and only – time in HTQ history, the runner-up had to fulfill the duties of the dead Queen, and we elevated the lovely, but confused, Curli-Q to be Queen for one hour – not a bad reign for a girl nobody wanted! The Honky Tonk Queen contest was again held at a reasonable hour, and Lois entered yet again. This time, she lost to a rubber-encased lesbian who stole Lois’ idea of having peons (no, not pee on!!!) chant her name. Gotta luv a girl who steals from the best!

Donna Matrix had a great contingent, who proved to one and all that we truly were not worthy. While the contest was a few laughs, the bathing beauties (also known as the Honky Tonk Training Academy, or just Miss Jean Brodie’s School for Girls) were ejected from the pool by a hotel manager for scaring the children. Seriously! And in the midst of a Democratic administration!!! The embarrassment! The humiliation!! The humanity!!! THE BASTARD!!!!![2]

Retrieved from "https://iagsdchistory.mywikis.wiki/w/index.php?title=Moolena&oldid=25058"
Categories:
Cookies help us deliver our services. By using our services, you agree to our use of cookies.