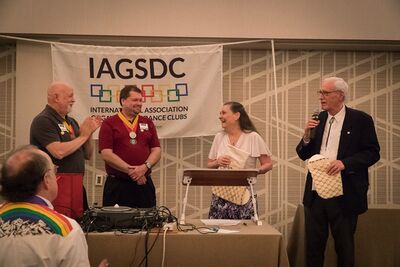 We would first like to thank Keith Gehrig for choosing us as the 2017 recipients of the Golden Boot Award. We are humbled to be included in such an illustrious group.

Could we have all Golden Boot recipients present please stand?

For both of us, as with many past recipients, square dancing has given us far more than we can ever give back. It is what kept each of us from becoming hermits. Despite the fact that almost nobody believes us, we are both introverts who refused to allow ourselves to turn into Old Cat Ladies. Square dancing is where we met. It links us with a huge portion of our friends and chosen family.

To those of you for whom this is your first convention, I offer some background.

The Golden Boot was originally given to Art Smith by Puddletown Squares here in Seattle for his contributions to gay square dancing in the Pacific Northwest, including his involvement in the creation of Puddletown Squares, Squares Across the Border, and Rosetown Ramblers. Art then chose to pass it on to someone at the international level as an ongoing recognition of someone in our community who has made exceptional contributions to our activity.

Since that time, the award has continued to be passed each year from one recipient to another of their own choosing. This is not an award by the IAGSDC. It is the responsibility, the joy, and the curse of each year's recipient to choose the next whose contributions they believe deserve recognition. There are no requirements or official guidelines for making this choice. It has gone to individuals, groups, and organizations.

Our choice for the 2018 Golden Boot award is again a couple.

Would Barry and Pam Clasper please come up to the stage.

This year's award comes in the form of Christmas stockings made by hand by Ross for Pam and Barry, with the fabric having golden boots printed on it, and an inscription inside that says:

Retrieved from "https://iagsdchistory.mywikis.wiki/w/index.php?title=Golden_Boot_2018&oldid=19854"
Category:
Cookies help us deliver our services. By using our services, you agree to our use of cookies.