When Ross & Justin called our names last year, we were gobsmacked. We’d played the normal guessing game, but never came up with our own names. Thank you Justin & Ross for honouring us with the Golden Boot and including us in such august company.

Square dancing has given us so much more than we can ever give back. We’ve become friends with so many wonderful people, found a second family and traveled to so many places we probably wouldn’t have otherwise been to. The bit that we do to try to give back is definitely a labour of love.

The Golden Boot was first given to Art Smith in 1983 in recognition of his starting Puddletown Squares and then Rosetown Ramblers and Squares Across the Border. Art decided to pass the honour on to the South Florida Mustangs, the first gay square dance club. And so a tradition was born.

Past recipients of the Golden Boot include the founders of the IAGSDC and many of those who have worked, both publicly and behind the scenes, to keep this wonderful organization going. It is not an official IAGSDC award, but is passed from one person or group to the next. Recipients have included men, women, couples, groups, gay, straight – and I do believe Barry is the first straight man to receive it. There are no specific criteria or guidelines – each recipient chooses who to pass it on to. Would all those past recipients please stand and be recognized.

Now it’s time for us to pass the Golden Boot on to the next deserving recipient. This person started dancing in 1995, attended their first convention the next year and every one since. As with many past honourees, this person wears many hats within the umbrella of the IAGSDC, such as belonging to multiple clubs, working on multiple convention committees (including two upcoming ones), and writing several fun badge tour scripts. He’s a caller, a member of GCA and CALLERLAB. Barry & I each work with this person when he’s wearing a different hat. Barry writes articles for The Call Sheet and I’m involved with the IAGSDC History Project.

Would Allan Hurst please come to the stage.

It is customary for the Golden Boot recipient to receive a gift from the presenters. Our gift to Allan is a cross-stitch panel that depicts some of his many contributions. Pam made it. And because she is much too modest to brag on it appropriately, I’m the one who’s going to tell you about it. First, as you can see, it depicts many, but not all, of Allan’s achievements. This may surprise you, but if you Google “Allan Hurst Golden Boot cross-stitch pattern” you don’t get any useful hits. Amazon has nothing. So Pam had to start by designing the pattern from scratch. She determined that for the letters in the logos to be legible, she had to design a 20-count pattern. For those of you non-crafty types – that means 20 stitches per inch – like, REALLY tiny, and a gazillion of them. Then she had to find all the right colours to make the logos look right. And then she stitched for a few hundred hours.

So you can see that Allan is involved in many aspects of the IAGSDC, CALLERLAB, the GCA, and square dancing in general. He distinguishes himself in every initiative he takes on, but there are two in particular that we think are particularly important. They are the GCA Call Sheet, and the History Project.

Under Allan’s hand, the Call Sheet has evolved into a widely distributed and respected newsletter. At CALLERLAB it has been held up as an example of what a professional newsletter should look like. It counts among its contributors some of the most well respected authors in the square dance world. Authors are happy to submit articles because Allan always makes them look good. I know I’m continuously amazed at how, with just a few strategic edits, Allan shows me how what I wrote should have looked in the first place. (This speech would have been so much better if I could have given it to Allan to work over). The Call Sheet is important because it is an important source of information for callers and dance leaders. But perhaps more important is that it acts as a bridge between the Gay and Straight square dance worlds – and one that shines a spotlight of excellence on the IAGSDC and GCA.

And then there is the History Project. Pam is the Chair of the CALLERLAB History Committee. That gives me a front row seat to the difficulties involved in finding materials that document our square dance activity’s history. Much of it was never captured at all, and much of what was recorded is now lost. Allan decided that he wasn’t going to let that happen for Gay square dancing. He conceived the IAGSDC History Project and recruited a team to help him gather and post material. This hasn’t been an easy road. I remember the first few times Allan talked about the Project from stages like this. Let’s just say he wasn’t met with wild enthusiasm. But he persevered; spoke and presented, cajoled and persuaded, recruited and dragooned. Today much of the material gathered is accessible in the History Wiki which is a rich repository of history about IAGSDC clubs, conventions, callers, and more. Included in “more” is information on the memorial panels that allows you to find information about where a person’s badge is, see a picture of it, and a biography. You’ll hear about other parts of the project tomorrow when Allan does his presentation about the History Project. 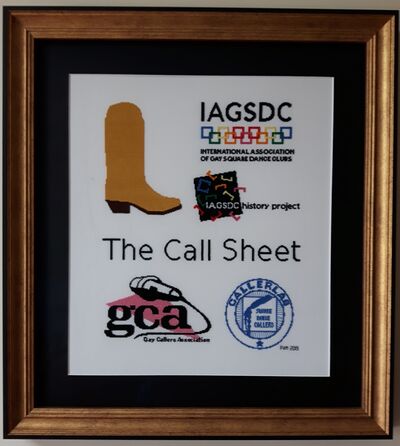 Retrieved from "https://iagsdchistory.mywikis.wiki/w/index.php?title=Golden_Boot_2019&oldid=9038"
Category:
Cookies help us deliver our services. By using our services, you agree to our use of cookies.