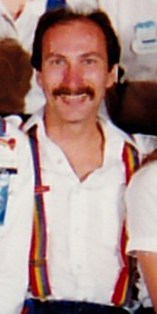 REINBECK — Gene Allan "Joe" Petersen, 54, of Evergreen, Colo., formerly of Reinbeck, died Wednesday, March 29, in Denver, Colo., after a lengthy illness; survivors include his stepmother, Betty Petersen of Reinbeck; two brothers, Larry of <Morrison and Walter of Seoul, Korea; and a sister, Janet Tedore of Reinbeck; he was preceded in death by his parents, Alvin and Pauline Watson Petersen; a memorial gathering will be from 2:30 to 4 p.m. Saturday at the Reinbeck Memorial Building; Mr. Petersen was a licensed medical social worker at the National Jewish Hospital for Children, Human Services, and the Children's Hospital, all in Denver.[1]

Joe Petersen was a resident of Denver and a member of the Rocky Mountain Rainbeaus. He began dancing with (now defunct) Mile High Squares in the summer of 1984, moved to Rocky Mountain Rainbeaus that fall, and graduated with the Rainbeaus Mainstream class in January, 1985. Until his death, he was an active member and supporter of the club. Over the years, he held several offices including president and treasurer.

Joe personified the playful spirit of the Rainbeaus. He believed strongly in club member "kinship", and demonstrated that belief through continual acts of kindness and generosity. Many remember the fall pot lucks and hikes at his mountain cabin. Others remember his extensive collection of costumes (and his joy in using them). Still others remember his "orphanage" of Cabbage Patch dolls, and his conviction that no doll should be homeless.

He was instrumental in organizing the Rainbelles, and for several years coordinated affairs for the entourage. At first known as Tiffany, he is best remembered as the beloved Ma Belle.

The Rainbelles is a multicolored costumed group of dancers that often make appearances at big square dance events. Members are not necessarily selected for their dancing skill, but rather for their willingness to participate in the goofy drag shtick of the Rainbelles. The word silly comes to mind, and they are fabulous!

Joe was raised in Reinbeck, Iowa. He earned a Bachelor's degree from Cornell College in Iowa and a Masters degree in psychiatric social work from the University of Chicago. In between his undergraduate and graduate studies, he served in the Army where he attained the rank of Captain. Before he retired, he was a psychiatric social worker at Children's Hospital in Denver.

Joe wanted to give back to square dancing as much as it had given him. So, in his will, he created and funded the Rainbow Trust. This Trust would provide annual income to the IAGSDC for the advancement of square dancing. Joe did not make this known before his death, and the Association was surprised by the generosity and magnitude of his bequest when the terms of the will were revealed. The Association established the Petersen Fund to receive income from the Rainbow Trust. This Fund is a memorial to Joe Petersen, who truly had the spirit of square dancing.

Retrieved from "https://iagsdchistory.mywikis.wiki/w/index.php?title=Joe_Petersen&oldid=22395"
Categories:
Cookies help us deliver our services. By using our services, you agree to our use of cookies.