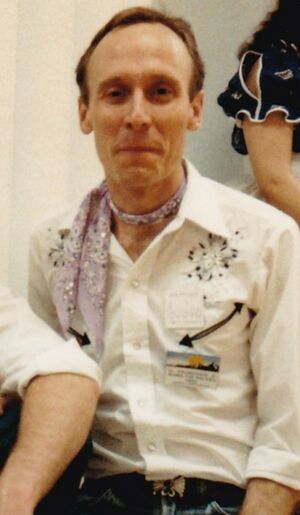 At Promenade Along The Rockies, 1985

In Their Own Words

Ken Pollack, Times Squares, New York City, is a person who always comes to my mind when I think of the positive reasons for being a square dancer. He is a founder of the Times Squares and has been a pillar of the club since its inception. I know that he was supported by other people in those initial months of organization, but his name and energy have shown through the combined efforts of all the “Broadway babies.”

I met Ken at the San Francisco Convention when I plopped myself beside him at the Saturday dinner. He was in his black and white checked shirt (as were the other from the Times Squares), and I was in something a little more overstated. He was so quiet and gentle, and I have come to know that he is a truly dedicated worker who is not afraid of hard work. But, he seems always quiet and gentle with the ability to be respected by everyone. If he has adversaries, you certainly never hear the name of Ken Pollack in any derogatory comments.

The 1989 IAGSDC Convention will be in New York City --- a city where the only square dance club is a gay square dance club. Times Squares is a strong, vital, and active club in the Association. To think of all these people coming out of the darkness of Broadway theaters into the open arms of square dancing is amazing. Ken Pollack was there at the beginning, and he remains a primary source for dance instruction for the club he helped begin.
— Freeman Stamper[1]

In 1988, Scott Carey presented Ken with the Golden Boot Award.
In 1989, Ken passed away in February, mere months before the convention. In his stead, his sister Margaret Pollack and Patrick McFarland presented the award to Freeman Stamper.

POLLACK – Kenneth. On February 24, 1989 at age 35. He is survived by his mother, Mary, of La Jolia, Ca., his sisters, Margaret , of Falls Church, Va., and Kathy Hampton, of El Segundo, Ca., his aunt Olga Peters, of Santa Barbara, Ca., and by his many devoted friends. A memorial visitation will be held on Thursday, March 2, from 5:30-8pm, at Frank E. Campbell’s, Madison Avenue at 81st Street. Contributions in Ken’s memory may be made to GMHC, PWA Coalition or God’s Love We Deliver. Ken graduated from Occidental College and Yale University and worked as an environmental planner. He founded the Times Squares Square Dance Club and actively participated in its leadership for almost five years. Ken was a highly principled, extremely generous person, a wise and gentle counselor and a true friend. He will be greatly missed.[2]

Ken and I were close friends for five years. I met him at the second Sundance square dance in January, 1984, held on the third floor of the newly opened Community Center. We exchanged a few words and when it came time to leave we walked along 13th Street, Ken with his bike, until I turned north on Third Avenue and he south,. I recall being impressed by Ken’s unassuming manner. It could not have occurred to me then that Ken would provide the spark that led to the creation of the Times Squares.

Ken was among a small group in Sundance which explored how to progress from beginners’ dances open to all, to a group where a mainstream program could be taught to those committed to learn. When the formation of the as yet unnamed group was announced, it was Ken who traveled the city on his bike, posting flyers at the Center and in bars and bookstores. Thirty-five people got the message.

Throughout that first year, from October ‘84 to May ‘85, Ken assisted Ron Masker in teaching, demonstrating, explaining and encouraging the class. (“A Fan the Top is a Fan the Top.”) There were naturally no angels that year so Ken undertook it to perform those functions. His living room became a clubroom on Sunday afternoons for those who wanted to review calls taught during the week or who missed that Wednesday’s session. Ken happily provided the space -- and the atmosphere -- for continual practice, allowing each of us to gain confidence in his ability to dance and to want to dance.

It now seems to me that Ken was everywhere that year. When the two of us had dinner together or went to a movie the topic of conversation would invariably be square dancing. (In this we were not alone.) Ken was full of ideas about where the club was going and how to get there, what music was just right and what wasn’t, what the following year would bring. It was even possible for us to exchange a bit of square dance gossip, but only on rare occasions of course!

Ken bought the club’s first sound system, many of the first records, and was the club’s ears to the longer established gay clubs in the West. He also got to know many of the leaders of the other clubs by serving as our representative to the IAGSDC Council for several years. Later he would delight in sharing his experience of starting the club with those in other cities trying to start a gay square dance club.

After the Denver Convention and the summer of ‘85, Ken was part of the core group that planned the club’s future. Ken believed strongly in expansion of the club, in adding new members and new dance levels within the framework of Times Squares. He served on the committee that wrote the by-laws and was afterward elected to both the first and second boards of directors in 1986 and 1987. At the same time he was teaching the first two plus classes and taught the third class in conjunction with others.

Besides his official functions he attended many of the classes, introducing himself and gently offering assistance when needed, As we all know he made many friends among members of each class. He genuinely enjoyed dancing and liked those he was dancing with.

Ken became ill about a year ago and spent many months in the hospital. Throughout the ordeal he maintained a positive attitude, never surrendering to despair, living a full life during his well times. He attended many square dances and other Times Squares events. Even when he couldn't fully participate, he’d enjoy just being there.

I and so many others have lost a dear friend and yet I think we were able to let Ken know how much he meant to us. The Times Squares owes a tremendous amount to Ken Pollack. In a real sense the continued success of the club is a part of the legacy he left.
— Bob Rosenthal[3]

Come and dance, as our sorrows we share.
Let us highkick and sashay this prayer:
May old friends we recall —
Ken, Joe, Sandy, et al. —
Dance in spirit, in every new square.
— A.S. Mouse[4]

I feel bereft with the death of Ken Pollack. He was the absolute ONLY member of the Times Squares in my three years of dancing that I could play with – beyond couples, and even beyond squares. (It was only last Halloween that, finding ourselves close together, but in adjacent squares, we simply traded places, traded squares – and then, eventually, traded back! “Trading off” – is that what it’s called?)

It has occurred to me that although (given my limitations) Ken Pollack was the only one I could play with in this way, certainly the opposite could not be true of him. I would like to hear from any Times Squares member who has had experience in playing in this way with Ken Pollack (or others).

It seems to me that the experience of such play is on such an exalted level (far above play with couples – although that is fun) that I simply cannot bear a permanent impoverishment (knowing, of course, no one could replace that sly grin when the trick was brought off). I would be interested in anyone’s opinion, etc. as to why such play is so rare – and ideas, maybe, on how to establish it, encourage it, make it grow.

I am aware of course (as who could not be?) that the club has a history of being rather uptight about square breakdown and “quality of dancing”, but it seems to me that now the club is more mellow, say. Relaxed” able to tolerate play that when it goofs inevitably breaks down the square. What is the term for such play? Is its very rarity part of its exalted feeling – or can it be common: once a night, say? It seems a “ticklish” question to me – but is it?

Retrieved from "https://iagsdchistory.mywikis.wiki/w/index.php?title=Ken_Pollack&oldid=22081"
Categories:
Cookies help us deliver our services. By using our services, you agree to our use of cookies.