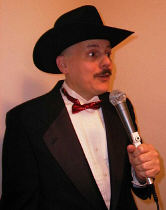 Nick attended his first GCA caller school at the 1991 Miami Convention. He dances and calls through C-2 and has taught Mainstream, Plus, and C-1 classes for New York's Times Squares. Nick's calling career spans both the gay and straight square dance communities. He calls regularly for clubs in the New York-New Jersey-Connecticut area and has performed at the New Jersey, Connecticut, Empire State, and New England Conventions. He was featured at Load the Boat VII in Cleveland and will be on staff at Peel the Pumpkin 1998 in New York. You may also remember Nick as the piano player in the lobby bar during DC's Stars and Squares Forever Convention and as Deborah Parnell's accompanist in San Francisco. Nick is honored to have been asked to call for Portland's Trail-1n Dance.[1]

Retrieved from "https://iagsdchistory.mywikis.wiki/w/index.php?title=Nick_Martellacci&oldid=24417"
Categories:
Cookies help us deliver our services. By using our services, you agree to our use of cookies.