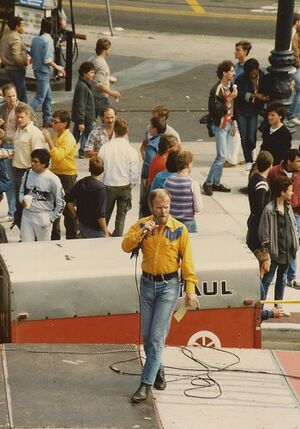 Calling for the Bay City Ramblers, 1984

It is hard to overstate the control that Skip Barrett had over “Square Dancing” in San Francisco in the early eighties. He had that certain charisma that a bully has. He had the glamorous space at the big disco hall for his classes. And he had worked out a “routine” - teaching singing call records as choreography - that took advantage of the “Urban Cowboy” Country Western fashion craze of the day. It was very important what we wore, what clique we were in, and what blind allegiance we paid to Skip. But this isn’t a note about Skip. Just to tell you how the odds were against Western Star Dancers at the very start.
— Scott Carey

I wonder if Skip had a personality disorder—he was in charge, and he intended to stay in charge. We had a good conversation one evening until I made the casual suggestion that he hire a professional caller, and I learned right away that that was a major affront. He was making beaucoup bucks, and as far as he was concerned, that made him a professional. With that remark, I became an antagonist and gone was mutual respect. And of course, many of us remember how angry he got when Happy New Year called an impromptu dance behind the chain-link fence at Reno, summer 1982. He would have none of it. He immediately directed his dancers to board the buses for a return to San Francisco. I remember that our goodbyes were rushed, and then the buses were gone. He couldn’t expand his thinking to allow for a broader understanding of square dancing. I guess the Callerlab format threatened his empire/revenue stream.
— Karl Jaeckel

Retrieved from "https://iagsdchistory.mywikis.wiki/w/index.php?title=Skip_Barrett&oldid=21494"
Categories:
Cookies help us deliver our services. By using our services, you agree to our use of cookies.