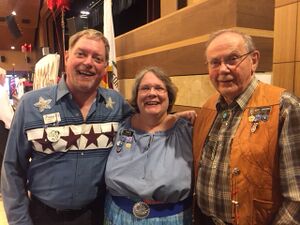 In his spare time Bert enjoys puttering with his computer -- not that he has much spare time, for Bert not only calls for two Bay Area clubs, but also has been employed as publications manager for Pumptron for 31 years. In addition, he owns, along with his wife, Ronda, BRS Square Dance Records and Engraving in San Pablo. a native of Berkeley, Bert began square dancing in 1963 and by 1968 was a graduate of calling classes run by Bill Peters and the late Bill Castner. An unexpected benefit of calling was his marriage to Ronda, one of his square dance students; they now have three grandchildren.[1]

Bert received his certificate for 50 years of calling from CALLERLAB in 2017.

In 1984 or 1985, not too long after Western Star Dancers started dancing, they were looking for callers to come to their club in San Francisco.

Bert Swerer was asked if he would be one of the callers. It was something that we had to talk about. He was a local Bay Area caller, we owned BRS Square Dance Records & Engraving. At one of our local Square Dance Callers Association of Northern California (SDCANC) meetings, one of the local callers had said that no one should go help the gay clubs. Basically, they were on their own. So, we had to talk. We sold our records at the caller's meeting each month, we made a lot of the local caller's badges for their clubs. Did we want to jeopardize our business? Did we want to get blackballed? Did we want to help a club keep going? What was more important to us? Honestly, we didn't know. We talked about it on and off for about a week. One of the things that finally made up our mind was, James Ozanich. We knew him, his parents were in our club, he danced with us, he was a special friend. I asked Bert if he would call at a gay club if James was there and he said yes. So then I asked if he would call at a gay club if James wasn't there? And he finally said, why not! So we decided we wouldn't advertise it, but if we were "found out", then we'd deal with it then. Our first night for Bert calling at Western Star Dancers was wonderful. They gave me a bouquet of flowers, they wore arm bands so he'd know which person was the male dancers. It took some learning on his part with so many men dancing together. They ended up giving us Honorary Badges, which touched us very much.

That also started Bert calling for Foggy City Dancers quite regularly. One of the clubs in Oregon (this has to be Rosetown Ramblers) flew him up to do a dance in Oregon one year. For the Rose Parade? So long ago, I don't remember. He went there and I went to my nephew's wedding.

We had made a lot of friends and business customers, we had lost a lot of them too with their passing. It's funny, every few months Carlos Mosca pops into my thoughts, he was one of my favorite customers, whom was a friend. Not all customers are friends, but Ren Brown, Carlos Mosca, and Bill Whitefield were three very special people to me besides customers. Bill Whitefield would let Bert park in his driveway, then we'd schlep the stuff over to the Foggy City Dancers dance hall which wasn't far from where he lived. And I've still got James Ozanich and Ren Brown that I count as wonderful friends for over 30 years. I might not see them often, but there are right there in my heart. We made the right decision to help keep square dancing alive by calling for the clubs in San Francisco.
— Ronda Swerer, wife of caller Bert Swerer, who resides in the San Francisco Bay area.

Retrieved from "https://iagsdchistory.mywikis.wiki/w/index.php?title=Bert_Swerer&oldid=21842"
Categories:
Cookies help us deliver our services. By using our services, you agree to our use of cookies.