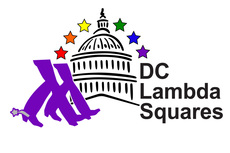 From the Program Book for the 3rd IAGSDC Convention, held in San Francisco in 1986:
The Lambda Squares began meeting in 1982 in suburban Takoma Park, Maryland, for the purpose of dancing "contra," a style of traditional New England folk dancing. Growing interest in modern western square dancing among the dozen or so initial members prompted them to begin alternating contra with square dancing in their Sunday afternoon meetings, with Doug Barnett calling both dances. In 1983, the group switched its meeting nights to Thursday and narrowed the dancing to modern country square exclusively, with two squares participating on a well-attended night.
The board of directors agreed to move to downtown Washington, D.C. to attract more members, and began the fall of 1984 session in a church recreation hall in the Adams Morgan/Mount Pleasant area, to which it drew some two dozen new participants through ads in the local gay newspaper, the Washington Blade. A few weeks later a permanent home was established in the Church of the Holy City near Dupont Circle.

Retrieved from "https://iagsdchistory.mywikis.wiki/w/index.php?title=DC_Lambda_Squares&oldid=21956"
Category:
Cookies help us deliver our services. By using our services, you agree to our use of cookies.