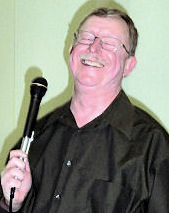 Warren was club caller and teacher for DC Lambda Squares for many years.

Warren suffered a major stroke while teaching a Mainstream class on Monday, February 26, 2007. Two days later on February 28, he passed away peacefully early in the morning with his partner Tom Pearson at his side.

Warren was named for his father's twin who died at 9 months on May 21, 1921. They are both buried in the same grave in the Evans-Jaquith plot in Pine Grove Cemetery, Spencer, Massachusetts.

Warren was generous in spirit and had the gift of humor. He was a gourmet cook and loved to entertain family and friends with his partner, Tom. (Note, Warren & Tom never legally married, as same-sex marriage was illegal in Virginia. They were, however, recognized as married by friends and family). He loved family and friends, traveling, movies, drama, concerts and opera. Warren was also an accomplished square dancer and caller. He was a co-founder of DC Lambda Squares in Washington, DC. He suffered a stroke while teaching a beginners' class. As a gay man, both he and Tom enjoyed the love and acceptance of family members.

Even as a small boy of nine years, Warren was known for his generosity and selflessness, offering the entire amount of money in his wallet to his widowed grandmother, Helen Frances (Evans) Jaquith, following the death of Milo Warren Jaquith, her husband and Warren's grandfather. And that same character trait was evident just days before he suffered a stroke, when he delivered several homemade meatloaves to his elderly parents' home.

Hundreds of people attended his memorial service at Christ Congregational Church (United Church of Christ); pews were filled and standing room only was available for others who lined the walls of the sanctuary.

The graveside service in Spencer, Massachusetts, was attended by many family members in June of 2007. His sister Susan brought a handmade baby blanket, made by Grandma Helen Frances (Evans) Jaquith in 1948, in anticipation of Warren's birth. He was a beloved grandchild, son, brother, uncle, nephew, cousin, friend, colleague, and indeed, a cherished and beloved life-partner (husband) whose spirit blessed and blesses this world. We give thanks for the opportunity to share in the time he spent with us. Following the graveside service, Warren's 86 year old mother, frail and suffering from moderate dementia, knelt on the ground and kissed his gravestone.

Warren died far too young. He was a beautiful soul and source of love and laughter during his time among us. Rest in the peace of God, Warren, beside your beloved grandparents, Milo and Helen Jaquith.[1]

Betty Riehl Excellence in Service Award Warren Jaquith joined the American Advertising Federation as the receptionist in 1998. For the next nine years, he embraced his position, literally receiving every visitor, phone call and delivery that came to the AAF. Warren had a very specific and unique ability to connect with people instantly. Everyone who met him—and even those who only spoke with him over the phone—were happy to say they knew him.

Like Betty Riehl, Warren was an essential member of the AAF family. And also like Betty, he possessed an unending supply of warmth, humor and patience. From behind his desk in the center of the AAF’s headquarters in Washington, D.C., Warren represented the AAF at its best. He cared for our members in every way he could. He was great with details and never overlooked any request. Warren understood that the smallest gestures can mean the most, and he took every opportunity to make anyone who walked through the door feel at home. And to those both in the office and across the country, he was the voice of the AAF—a warm, mellifluous, meant-for-radio voice. Warren without fail was welcoming, charming, friendly and helpful.

Warren also played an integral role at each of the national conferences he attended. His domain was the staff room, where he kept everyone focused, cheerful, on schedule and supplied with food and chocolate, which Warren insisted was full of Vitamin C. He was the epitome of “grace under pressure,” and his assured demeanor was a steadying force for the entire staff.

Outside of the AAF, he brought joy and his perfect dry comic delivery to legions of square dancers. Warren was a founding member of the D.C. Lambda Squares and a revered teacher and caller. He and his partner of 24 years, Tom Pearson, enjoyed traveling, good food and Bombay Sapphire martinis.

Warren died suddenly on February 28. We present the Betty Riehl Award in honor of his dedicated service to the American Advertising Federation and to celebrate the nine years of kindness, quips, puns and smiles he gave to every member of the AAF family.[2]

Warren's badge was pinned to the IAGSDC Memorial Panels at the 2007 convention in Denver. (Note: Center right on the linked badge photo.)

Article The Importance of LGBTQ-Affirmation To a Grieving Family by Susan Jaquith, Warren's sister

We have truly lost one of the most important, loving, friendly, and positive members of our square dancing family. I learned to dance in DCLS, and it was always comforting to have Warren in my square. He was unwavering in his support of student dancers, offering always-gentle help when appropriate, often in a way such that no one else in the square knew that he was helping. He cared about helping you feel comfortable and become a better dancer, never about showing off. He even made breaking down a pleasant experience. I will also miss his ever playful calling. There was never any "dancers vs. caller" with Warren; he was always on our "side".

At Convention, as I square up to dance, I will ask Warren the question he so often asked of me: "Come here often?" I am very grateful that the answer has always been "yes", and will still be "yes" in my heart.

Retrieved from "https://iagsdchistory.mywikis.wiki/w/index.php?title=Warren_Jaquith&oldid=24404"
Categories:
Cookies help us deliver our services. By using our services, you agree to our use of cookies.