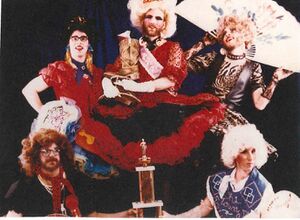 Layona Davenport was the winner of the Honky Tonk Queen contest in 1990.
For personal appearances, please consult Brad Scott.

Unlike her predecessors, Tami did not have the good graces to stay away. Not only did she show up, SHE TOOK CHARGE OF THE MICROPHONE !!!!!!!!!. The little bitch was disgusting. By imitating my style, my glamour, my every little nuance, she managed to pull the whole thing off. Oh sure I was there. I was still everyone’s best wet dream, but it just wasn’t the same. And of course Miss Wella - the doctor says I’ll be better any day now - Balsam was there. AND THEY MADE HER A PRINCESS !!!!!!!! And something about Virginia Hamm, which I thought was a part of the catering. Obviously the whole pageant was going to HELL IN A HAND-BASKET !!!!!!!! And to make matters worse everywhere I turned I saw Steffany with him, Terry Presley, my wicked, evil twin brother. They were everywhere, head to head, plotting, scheming, but what would be the result of their devious plans, WHAT!!!!! The strain was getting to me!!!!!

Oh yeah Layona Davenport won the contest. She had heard that it helped your chances if you slept with the judges, and since she didn’t know who the judges were, she slept with everybody who attended the convention.[1]

Retrieved from "https://iagsdchistory.mywikis.wiki/w/index.php?title=Layona_Davenport&oldid=25042"
Categories:
Cookies help us deliver our services. By using our services, you agree to our use of cookies.