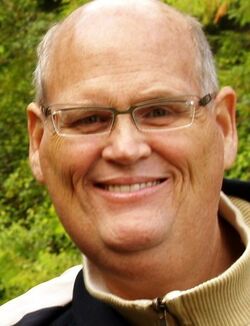 
In the early 1990s, Lynn was instrumental in the effort to remember lost dancers. His attempts helped give Freeman Stamper the inspiration to create the Memorial Panels.

It is with deep sorrow that we announce the death of Lynn McCasland (Dallas, Texas), born in Clovis, New Mexico, who passed away on January 14, 2021, at the age of 64, leaving to mourn family and friends. Family and friends can light a candle as a loving gesture for their loved one. Leave a sympathy message to the family in the guestbook on this memorial page of Lynn McCasland to show support.

Lynn Alan McCasland, age 64, passed away Thursday, January 14, 2021 after a long battle with liver disease. He was born June 29, 1956 in Clovis, New Mexico to the late Z and Aline (Rutherford) McCasland. After his high school graduation, he attended Harding College in Searcy, Arkansas before transferring to West Texas State University in Canyon, TX where he earned a Bachelor of Science degree in Nursing. He moved to Tucson, Arizona to begin his career in Psychiatric Nursing and later on to San Francisco, California where he lived for six years during the late 1980s and early 90s amid the HIV/AIDS crisis there. He left San Francisco and moved to Albuquerque, New Mexico to be closer to his family. During his years in Albuquerque, he continued his work in psychiatric nursing and also worked as a Hospice Nurse. He also survived Lymphoma and the deaths of both parents.

In 1998, needing a new start, Lynn moved to Denver, Colorado. It was there that Lynn met Randy Richter. Randy lived in Minneapolis, Minnesota and was in Denver for a conference that Lynn also attended. Lynn moved to Minnesota in February of 2000 to be with Randy and they started the new Millennium together. Lynn worked at Park Nicollet Clinic under the supervision of Dr. Heidi Joos. Dr. Joos, impressed with Lynn’s work, encouraged him to pursue a Master’s Degree in Psychiatry and Nurse Practitioner certification. Lynn began research on where he could fulfill his dream of a Master’s degree and found the perfect program at the University of South Florida in Tampa. In September, 2003, he and Randy quit their jobs and moved to Tampa. He began classes in 2004 and in 2007 graduated with honors with a double major in psychiatry and gerontology. It was also in that time that Lynn was diagnosed with liver disease caused by a Hepatitis-B infection. Dealing with liver disease and the associated complications of it, set the stage for the remainder of Lynn’s life. Following graduation, Lynn found it difficult to find a suitable job in Florida. Working with a recruiter, he was offered a position with MetroCare in Dallas, TX. From a young age, growing up in eastern New Mexico, it was always Lynn’s dream to live in Dallas, he accepted the job and in 2010 he and Randy moved to Dallas, Texas and Lynn’s seemingly unattainable dream was complete. At MetroCare, Lynn did the challenging work of caring for homeless individuals with mental health issues. Lynn later found his dream job at UT Southwest Health System as a consult liaison in psychiatry. He worked at UT Southwest hospitals, consulting with physicians on patient care, evaluating patients, and was a member of the Transplant Services team, evaluating transplant candidates. He loved his work and was highly regarded in his field. Over the years, the stress and physical strain associated with his position forced Lynn to take disability and end his career, which was a very difficult decision. In 2015, Randy and Lynn separated as a couple but were able to maintain their friendship. Shortly after, Lynn met Sam Lopez who became Lynn’s roommate. They formed a deep friendship and Sam cared for Lynn in his final years.

Lynn loved to cook, especially any recipe made with New Mexico Green Chilies. He cherished a few pieces of cookware left to him by his mother and many of her recipes that he had enjoyed as a child, but was also frustrated that he could never make biscuits as good as his mom’s.

A Celebration of Life will occur at a later date.

Memorial Contributions may be made to the Turtle Creek Choral by calling: 214-526-3214

Retrieved from "https://iagsdchistory.mywikis.wiki/w/index.php?title=Lynn_McCasland&oldid=18126"
Categories:
Cookies help us deliver our services. By using our services, you agree to our use of cookies.