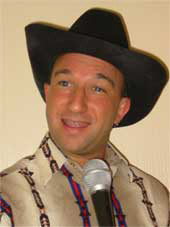 
Received the Golden Boot Award from Ett McAtee in 2005 and passed it on to All Join Hands in 2006.

From the Program Book of the 15th IAGSDC Convention, held in Portland, OR in 1998:
Seth Levine is the club caller for Desert Valley Squares in Phoenix, AZ. Seth is celebrating his 10-year anniversary calling and teaching, and will be part of the calling staff at next years's IAGSDC Convention, "Lights Camera, Linear Action," in Los Angeles, CA.

In 2005, Ett McAtee presented Seth with the Golden Boot Award.
In 2006, Seth presented the award to All Join Hands, respresented by board members Gordon Macaw, Randy Clarke, Greg Wilson, and Gary Dougan.

Retrieved from "https://iagsdchistory.mywikis.wiki/w/index.php?title=Seth_Levine&oldid=18769"
Categories:
Cookies help us deliver our services. By using our services, you agree to our use of cookies.