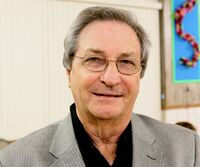 From the Program Book for the 3rd IAGSDC Convention, held in San Francisco in 1986:
One of the top recording artists in the country, Elmer is also a fixture on the national calling circuit, working out of his home base of Tallahassee, Florida. Some of his hit records, released through his company ESP Records, include such best-sellers as "Just Because" and "Swanee." A member of Callerlab's Board of Directors, Elmer joined his associate Paul Marcum to become the first nationally-known callers to perform at a gay convention, delighting the attendees at both Seattle in 1984 and Denver in 1985.

Retrieved from "https://iagsdchistory.mywikis.wiki/w/index.php?title=Elmer_Sheffield&oldid=7375"
Categories:
Cookies help us deliver our services. By using our services, you agree to our use of cookies.