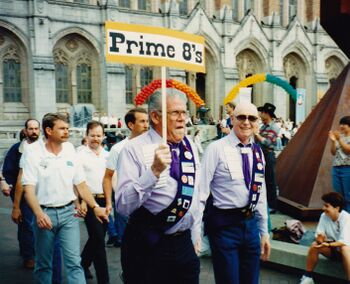 Bill and Stan leading Prime 8s for the Grand March at Remake The Circle, 1993

presentation at Remake The Circle by Lauro De Haan

[1992 recipient Keith Snowdon passed away before the 1993 convention. Lauro presented the award in Keith's name - Ed.]

[from an article in SquareUp! issue 8 - Thoughts on the Golden Boot by Anna Damiani]

I will never forget the day that Lauro De Haan announced my name (along with Stan and Bill) as being the winner of the Golden Boot Award. We were in Seattle for the tenth Convention. I remember looking around and thinking how difficult it must have been for Keith to decide who to give it to and then to have to ask Lauro to present it. I was thinking about Keith. I remembered the moments we had shared. The phone calls. The advice he had given me. I knew that whoever would receive the Golden Boot would be very blessed. After all, Keith was reaching out from beyond to present it. Lauro happened to be the very charming person who was helping him to do that.

As I looked around I noticed several faces that were missing. They, as had Keith, had been forced to miss the tenth convention because Life simply isn't fair. I was feeling nostalgic and wishing that so many others had survived to see that day. Suddenly, I heard Lauro say my name. Needless to say, I was stunned. I don't remember getting to the stage. I know that somehow I managed to get there because I saw the video later. I remember that people kept handing me kleenex so I must have been a real mess. I'm very glad that I was not asked to say anything. I doubt that anything I said would have made any sense at that point.

Keith had commissioned a local Pacific Northwest Indian artist to create a beautiful bolo with the sea otter logo which was the symbol for the convention. The three of us received the same bolo. Each one was inscribed with words from Keith. It is one of my most treasured possessions.

In the past, the Golden Boot Award has taken many forms. The original award that was given to Art Smith was an actual boot. In fact, it was the mate to the boot which forms the centerpiece for the Honky Tonk Queen's crown. That original award sits in our foyer, on extended loan to our home from Art Smith. I now own a building along with Scott Carey, John Conley, and Freeman Stamper called Golden Boot Ranch. When Art was here for a visit, he brought us the Golden Boot and said that it was only fitting that it should be here. It holds a place of honor in our home.

The Golden Boot Award is very personal. It is also a very difficult award to present. There are so many people who give and give at both the local and national level that it is a grueling process to try to narrow it down. One of the things that I like about the way the recipient is selected is that it is entirely up to the giver(s) to decide who it should go to. It provides someone who has been given this incredible honor with the ability to honor whoever they feel is most deserving. Because there is no selection criteria, the giver has the freedom to decide why they want to award it. As you know, the award has been given to individuals, a group, and even an entire club.

The award itself has taken on a variety of shapes. It has been a plaque, a watch, a bolo, and a belt buckle. It is not the item itself which holds the significance but the love, caring and recognition which it represents that are really important.

I have now been dancing nearly 10 years (in June) and look back on the many good times that I have had as a result of my dancing. I learned a lot about dancing, people, management, organizing, fund raising, loving, loss, joy, pain, and family from this world of dancing. I don't dance as much as I used to but I still have a very special place in my heart for dancing and the dancers. I'm glad that I have had opportunities to give back a little to an activity that has given me so much.

Retrieved from "https://iagsdchistory.mywikis.wiki/w/index.php?title=Golden_Boot_1993&oldid=13472"
Category:
Cookies help us deliver our services. By using our services, you agree to our use of cookies.