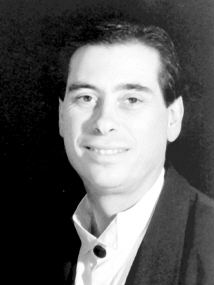 From the Program Book for the 3rd IAGSDC Convention, held in San Francisco in 1986:
With a background of round dancing, ballroom, tap, jazz, modern dance and ballet, Scot especially enjoys using his excellent singing voice n show tunes and jazz numbers. A popular caller in the Northern California circuit, he was a headliner at the "Star Thu" Kickoff dance in August, 1985. Learning to dance at the tender age of eight, he began calling when he was 12 and later attended the calling school run by Bill Peters. Scot was one of the first callers in his area to introduce a true Advanced and Challenge program to his dancers. In addition to having been club caller to several Bay Area clubs, he has also directed square dance and clogging exhibition groups.

Retrieved from "https://iagsdchistory.mywikis.wiki/w/index.php?title=Scot_Byars&oldid=7695"
Categories:
Cookies help us deliver our services. By using our services, you agree to our use of cookies.