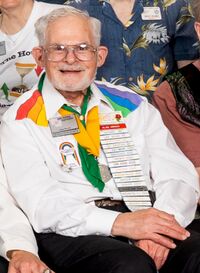 Alan Hirsch has been square dancing since 1949 when he was called "Little Cowboy" at the dude ranch outside Estes Park, CO which he visited in July for seven consecutive years with his parents.

In 1994, when Alan decided from move from Colorado to his hometown Chicago IL, he joined Chi-Town Squares and took lessons from Lin Jarvis. Alan decided to try calling and attended his first GCA Caller School in 1999. Since then he has been calling guest tips at Flyins and Conventions. Alan calls Mainstream and Plus programs and he dances the full Advanced program. He also calls a workshop before the regular dance of a Plus Club located in Pueblo, CO. He has also attended numerous GCA Caller Schools under coaches Anne Uebelacker, Barry Clasper, Sandie Bryant, Mike Jacobs, Deborah Carroll-Jones, and several other coaches. He has attended caller schools led by Wade Driver, Frank Lescrinier, Jerry Junck, Scot Byars, and others.

Retired now from a career in Information Technology in the Chicago area, Alan is happy to be dancing with the clubs in Southeastern Colorado and with Rocky Mountain Rainbeaus in Denver. He attends many flyins across the country throughout the year and calls guest tips at those flyins that welcome GCA Callers. He also calls at Colorado State Square Dance Festivals and calls guest tips at several Southeast Colorado square dance clubs regular dances.

Alan is frequently mistaken in conversation for Allan Hurst, simply because their names sound alike. Alan and Allan affectionately call each other "Dopps", short for "Doppelganger".

Retrieved from "https://iagsdchistory.mywikis.wiki/w/index.php?title=Alan_Hirsch&oldid=24030"
Categories:
Cookies help us deliver our services. By using our services, you agree to our use of cookies.