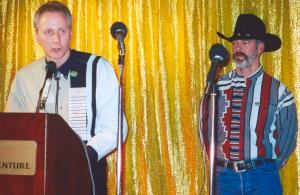 Mike and I would first like to thank Kris Jensen for the honor she bestowed upon us in Portland - and I especially want to thank her for recognizing Mike and his efforts to keep SquareUp as a viable means of communication in our organization. Mike and I have learned to agree to disagree on many aspects in our shared lives, but we both agree on the value of cherishing the past while looking toward the future. Thus, in pondering the Golden Boot Award this year, we both agreed that a study of the qualities exhibited by past recipients would help us make a difficult decision.

The first recipient of the Golden Boot, Art Smith, along with recipients Bill Eyler and Ken Pollack, helped us to see that the award has recognized efforts to keep the world of gay square dancing expanding with the establishment of new clubs. Stan Boyden, Bill St. John and the South Florida Mustangs are past honorees exemplifying the importance of many years of commitment to gay square dancing.

A love of the activity itself is expressed with the efforts of Harlan Kerr and Dave "Happy" New Year, and the current activities of Kris Jensen and Anne Uebelacker. A selfless love - and high regard for the importance of the local organization - can best be recognized in the accomplishments of Carol Roberts and Anna Damiani. Appreciation of the history of the organization was shown by Luis Torres and a fearlessness in establishing meaningful traditions is still shown by Freeman Stamper.

Getting involved in some national way, either through the IAGSDC board, the GCA or the convention process was demonstrated by Scott Carey and Keith Snowdon. And being daring enough to leave our little corner of the world and build bridges to the outside has been an ongoing project of Karl Jaeckel.

Of course, not all of these traits can be recognized every year. Each Golden Boot recipient demonstrates different permutations of the above traits and the wonderful diversity of our organization. In fact, this is what I love most about our activity - the diversity of our membership that allows us to keep changing and growing.

Each of these past Golden Boot honorees has set the stage for the future, and, after looking at this impressive list of people, Mike and I were able to agree that we had made a worthy addition to the list. Therefore, we invite all of you to join us in recognizing ... Paul Waters.

Ric and I have chosen Paul as the Golden Boot Award recipient to honor his extraordinary efforts in promoting gay and lesbian square dancing. His work has brought scores of new dancers into our community, many of whom are undoubtedly in the audience this evening.

The seed for Paul's commitment to recruiting was planted at our 1995 convention, Track II Chicago, where Paul attended Ian Henzel's recruiting workshop. Afterward, he took up the cause of applying what he learned by orchestrating a recruiting campaign in the Los Angeles area. The effort has been remarkably successful -- since 1995 the overall membership in the seven L.A. clubs has more than doubled. Not one to call it a success and stop there, Paul has furthered his recruiting efforts by organizing the first Simi Valley Gay Pride festival in 1998, and then repeating that effort this year. Hundreds of names of new potential square dancers have been collected at these festivals.

Other efforts underscore Paul's commitment to promoting gay and lesbian square dancing. As a caller who has worked with straight clubs since 1972 and gay clubs beginning in 1986, Paul is well known in both communities. His personal connections with many straight callers and dancers has enabled him to bridge the differences between our communities. For example, earlier this year, as one of two IAGSDC representatives at a United Square Dancers Association meeting, Paul presented the Henzel Recruiting Plan. He received many accolades for his presentation, and along with Darrell Ertzberger, has paved the way for gay and lesbian square dancers to offer advice to the straight square dance community. That's remarkable, considering that less than a decade ago we were hardly acknowledged by the larger square dance world.

There are other noteworthy contributions:

To honor Paul's commitment to our community, Ric and I have presented him with a silver belt buckle with a gold boot inlay, and the Golden Boot Award dangle provided by Freeman Stamper.

Paul backs up his ideas with action. His commitment to gay and lesbian square dancing has helped to build a stronger, and larger, community. Ric and I are both pleased to present the 1999 Golden Boot Award to Paul Waters.

Retrieved from "https://iagsdchistory.mywikis.wiki/w/index.php?title=Golden_Boot_1999&oldid=2583"
Category:
Cookies help us deliver our services. By using our services, you agree to our use of cookies.